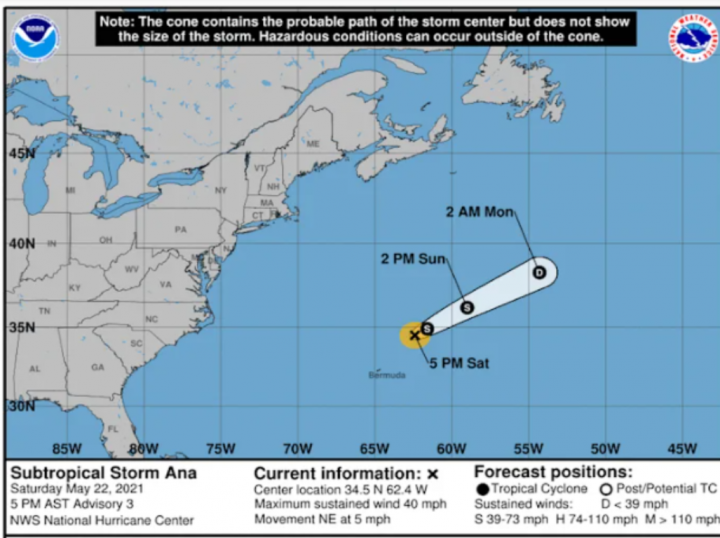 By Aaron Humes: For the seventh year in a row, a named storm has formed before hurricane season’s official start date — June 1, the Miami Herald reports via Yahoo News.

Subtropical Storm Ana came and went fairly quickly, after forming early Saturday morning a couple of hundred miles northeast of Bermuda, then moving northeastward and picking up speed away from Bermuda and the United States. Gradual weakening is expected Sunday and Sunday night, and Ana is forecast to dissipate by Monday, according to the U.S. National Hurricane Center.

Meanwhile, a disturbance that began in the Gulf of Mexico and made landfall in Texas is no longer being tracked by the NHC, as of the 2 p.m. update on Saturday.

It was an area of low pressure that was 50 miles east-southeast of Corpus Christi earlier Saturday morning moved inland over southeastern Texas. As a result, tropical cyclone formation did not occur, but the system was forecast to dump heavy rains over parts of already saturated southeastern Texas and southwestern Louisiana Saturday, the NHC said.

The National Oceanic and Atmospheric Administration (NOAA) has released its preseason forecast, which called for another active hurricane season, albeit not as active as 2020. This year, NOAA predicted the Atlantic will see 13 to 20 named storms, 6 to 10 of which could become hurricanes.

The names for the season have also been released, according to USA Today via Yahoo News. The World Meteorological Organization (WMO), based in Geneva, Switzerland, chooses hurricane names several years in advance, based on strict criteria. If a hurricane is particularly deadly or costly, then its name is “retired” by the WMO and replaced by another one.

If all 21 names are used this year, there is a new supplemental list of 21 names that will be used after Wanda. That list is as follows: Adria, Braylen, Caridad, Deshawn, Emery, Foster, Gemma, Heath, Isla, Jacobus, Kenzie, Lucio, Makayla, Nolan, Orlanda, Pax, Ronin, Sophie, Tayshaun, Viviana, and Will.

Prior to 2021, the Greek alphabet was used if the primary list was exhausted, using such names as Alpha, Beta, Gamma, and Delta, etc. But from now on, the Greek alphabet won’t be used “because it creates a distraction from the communication of hazard and storm warnings and is potentially confusing,” the WMO said in a statement.

Why – and how – do hurricanes get names? Before they started naming storms, hurricane forecasters had to refer to storms by saying something like, “the storm 500 miles east-southeast of Miami.” But six hours later the storm’s position would change.

Also, when more than one storm was going on at the same time, making it clear which storm was being described made the job even harder.

The names are alphabetical and each new storm gets the next name on the list. There are no Q, U, X, Y or Z names because of the lack of usable names that begin with those letters. There is a separate list for tropical storms and hurricanes that form in the eastern Pacific Ocean.