Arson suspected in San Pedro fire, authorities say situation could have been a lot worse 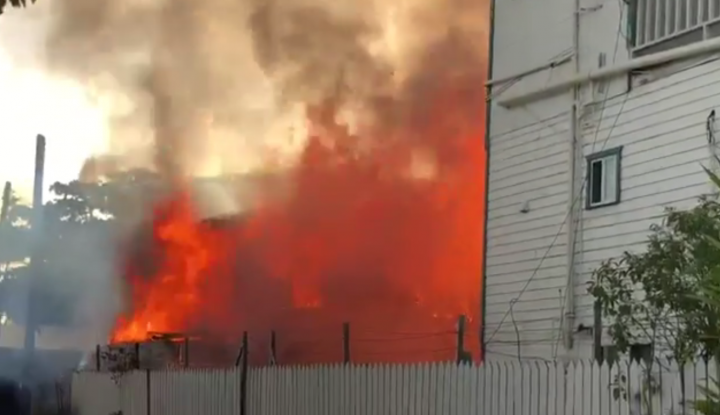 By Benjamin Flowers: On Sunday, Pedro’s Inn on San Pedro, Ambergris Caye along with a bar adjoining the building were completely destroyed by fire. While authorities suspect the incident to be a case of arson, they say they are grateful that the fire was confined to such a small area.

Personnel from the Belize National Fire Service (BNFS) got the call just before 6:00 a.m. and rushed to the scene to find the entire structure engulfed in flames. Off-duty fire personnel and even members of the community all assisted in getting the fire under control and eventually extinguishing it.

Station Supervisor for the BNFS Kenneth Mortis confirmed that police have detained someone suspected to be responsible for the fire and that BNFS personnel discovered what is expected to be the remnant of some accelerant in the kitchen, where the fire originated.

“There is an initial report that says it started in the kitchen area. We have confirmed with management that the kitchen wasn’t busy at that time hence the reason we are not leaning towards the fact that it might have been something left on or abandoned,” Mortis said. “Even the remains of the burners and so forth still showed that they were in their off stage. So we can confirm that the fire didn’t start from any stove or anything like that.”

Mortis added that there were several factors that greatly assisted firefighters in keeping the blaze from spreading to other buildings, including: the time of the fire (in the early morning with little traffic on the streets) which allowed firefighters to get to work quickly; the weather, as it was a calm morning with no wind to help the fire spread; and the number of people who showed up ready to assist.

“I cannot overemphasize how lucky we were. Let’s just say we got away by the skin of our teeth on this one,” Mortis added.

Pedro’s Inn was insured with RF&G Insurance. The BNFS is still conducting an investigation into the cash value of the loss suffered, as the building was completely destroyed.