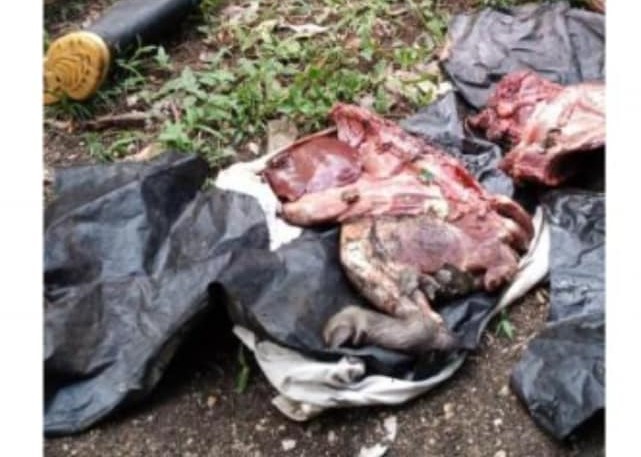 By Zoila Palma: Friends for Conservation and Development (FCD) informed that on Saturday, park rangers from the Chiquibul National park handed two Guatemalan poachers over to police.

Guatemalans, Raul and Victorino Rivera had game meat in their possession and a baby white lipped peccary.

FCD says that the peccary is now being cared for at a wildlife clinic.

Illegal wildlife trafficking and poaching has been documented in the Chiquibul Forest as a primary threat to biodiversity.

Many Guatemalan communities are proximate to the Belizean Chiquibul Forest and although there are strategic conservation posts along that western region, it is impossible to monitor the entire forested area.

The last research report on the status of Game Species Communities in the Chiquibul Forest, conducted in September 2019 noted that a decreasing trend was observed in the overall mean encounter rates of animal species but not statistically significant.

It also noted that areas that were categorized as having high hunting pressure were at least 6 kilometers away from the border.

Gregarious species such as White-nose Coati, Ocellated Turkey, Spotted Wood Quail, Collared and White-lipped Peccary are more at risk of experiencing abundance declines than more solitary species like the Red-brocket deer, Crested Guan and Agouti, due to illegal hunting as hunters will take more than one individual once a drove is encountered.

Both men are to be charged by the Forest Department and Immigration Department for possession of game meat and wildlife in a protected area, and for illegal entry.

The Wildlife Protection Act, Revised Edition 2000 notes that, “Any person who contravenes or aids or abets the contravention of any of the provisions of section 3, paragraph (b) or (c) of section 4, section 7 or section 9 commits an offence and shall on summary conviction be liable to a fine not exceeding five hundred dollars, or where the offender has within a preceding period of five years been convicted of a wildlife offence or paid compensation under section 22, to a fine not exceeding one thousand dollars or imprisonment for a period not exceeding six months, or to both such fine and imprisonment.”