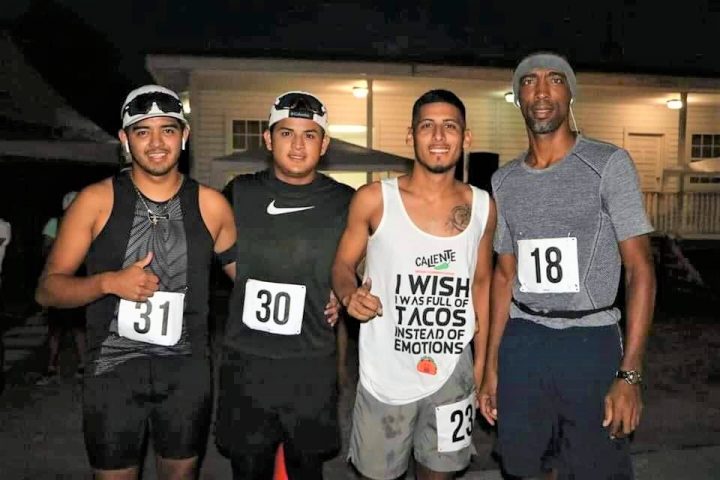 “It’s a sprint distance triathlon race,” said Trejo. “It’s a 750 meter swim, a 20K ride, and then a 5K run. There should be at least 70 participants that are going to be doing it from different places around the world.”

“The bike course will have a little bit of elevation, two hills. It’s gonna be 4 laps of 5K loops that we’re gonna do. And then, the running course is gonna be two laps of 2.5 kilometers each, totaling five kilometers,” Trejo said.

Temperatures in Huatulco are lower than in Belize so, the swim will be quite demanding, but Trejo said that he and the Santos had the opportunity to train in Ecuador in 2019 and that the water there is colder than in Huatulco.

“The swim, it’s gonna be open water swim. It’s going to be colder temperature of water as well. In Huatulco, we should be swimming in the mid to low sixties. We swam in colder temparatures in Ecuador like right under 60 degrees, between 56 and 58 Fahrenheit.

“We’ve been training and conditioning the body in hot temperatures right here, so for the swim it should beneficial for us. It’s a bit hotter temperature when you start the ride and the run, so I think that would be to our advantage since we’ve been training in those conditions here. So, it should be a little bit cooler over there, and when it’s a little bit cooler and we are raised in hot temperatures, it’ll benefit in regulating our heart rate a bit more.”

Trejo and the Santos brothers qualified to this meet by races they did in 2019 when they were initially trying to qualify to the 2020 Tokyo Olymics which will now be held in July and August.

“We got accepted through the ITU, the International Triathlon Union, to participate in this event. The country got three slots to participate.”

Trejo said the competition in Huatulco, Mexico, which is on the Pacific coast, will be fierce.

“Yeah, it’s a very difficult event as it’s going to be a lot of competition,” said Trejo. “I am assuming that the time to finish all three disciplines would be 54 minutes, the fastest time. But, anything under an hour in the event is a qualification time for the Olympics.”

The three will have to be at their very best to make that time.

“The three of us are actually trying to go make that PB, our personal best, for this event. At this moment for our time, we’re a a little bit more than an hour, between an hour and five and an hour and seven minutes,” he said.

Trejo is hoping that their training for this race will pay dividends.

“[If] we could get an advantage in regards to being a little bit more tactical with the race and preserving energy along with other athletes in regards to drafting in the water, on the bike and then hopefully we’ll have enough energy to finish off the run.”

Trejo said the National Olympic Committee and the Belize Triathlon Association are sponsoring their trip.