Police in Peten bust their own with white-tailed deer meat 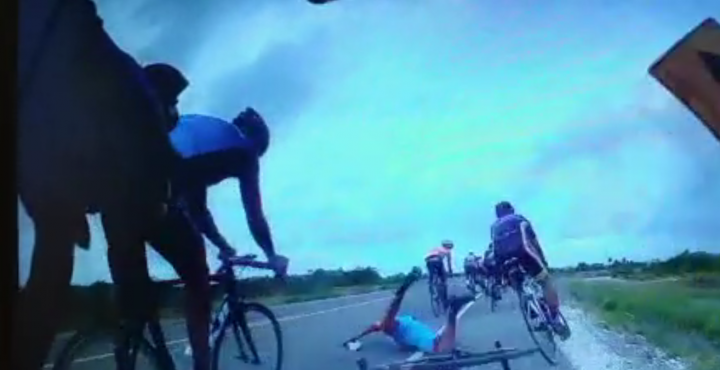 By Rubén Morales Iglesias: “Yes, I got stitches and hurt my shoulder,” said Kaya Cattouse yesterday evening after suffering a crash in the C-Ray’s Full Throttle Thursday’s Race on the John Smith Road near the George Price Highway 8-Miles roundabout.

“I’m doing good, got some cuts on my fingers and hit my elbow,” said Edison Usher, “But home safely.”

Usher further added that nobody broke any bones as it was feared that Alvan Gillett might have had a collarbone fracture.

“A few cyclists got injuries and others minor scrapes and bruises. Worst of the injured was Wayne Moses and Alvan Gillett from Team Kulture,” Cycling Live Belize reported on Facebook. “Followed by Alberto Acosta (FAL), Kaya Cattouse (C Ray), and Leroy Cassola (Santino’s).”

“Riders have been medically examined and treated already and all have been released and recovering.”

“It’s part of the sport bro. We live to fight another day,” Usher responded to a fan who expressed the pile-up made him “extremely sad broke my heart prayers for a speedy recovery.”

Cattouse, who was filming the race on her helmet’s bike cam, was behind Alberto Acosta, who fell onto the pavement causing a domino effect spill.

“At least like 8 or 9 of us went down,” Kaya said after the crash “There was a piece of clay on the road from those dump trucks. A cyclist hit it and his fork broke…the rest was history.”

“I have a busted elbow that needs a couple stitches and my shoulder, I think I have ligament or tendon issues,” Cattouse added.

Joshua Fuller went on to win the race.