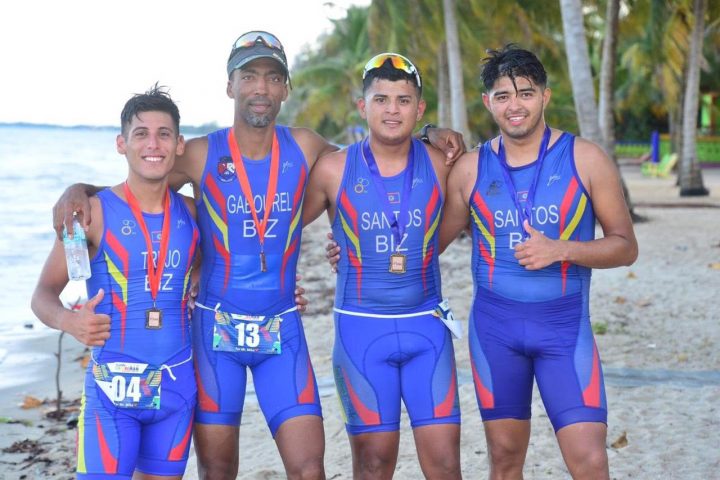 By Rubén Morales Iglesias: Kian Trejo and brothers Brandon and Jordan Santos who have been in Huatulco, Mexico, from Monday to compete in the World Triathlon on Sunday, June 13, said they are ready for the event.

“We’ve been doing some training, we did the course on Thursday and Friday,” said Kian Trejo, “It’s good, it has a couple climbs for the bike ride and the run. The run is going to be on the same course as the bike. It’s four laps on the bike and two laps on the run, and one lap for the swim.”

Trejo said they have been running, riding, and swimming getting ready for the triathlon.

“Yesterday and the day prior, the sea was a little bit rough,” Trejo said. “When we got in, it was much calmer, but we’ll see how it turns out for Sunday. They say we’re going have rain.”

“Yesterday, we had the swim familiarization, but we only had about 20 minutes to half-an-hour because they started taking all the athletes out of the water because it was raining and lightning.”

Earlier, Trejo said they are competing in a sprint distance triathlon race.

“It’s a 750 meter swim, a 20K ride and then a 5K run. There should be at least 70 participants that are going to be doing it from different places around the world.”

Trejo has competed in Guatemala and the United States. Jordan Santos who competed in the Pan American Games in Peru in 2019 said they are ready to take on the competition.

“We already put in a couple training sessions to get used to the humidity here in Mexico,” Jordan said. “Actually, we feel very good right now. We tested the road, we tested the water, we tested the hills. So, we feel pretty good. Ready to go on Sunday. It’s going to be a very fast race.”

“Right now, we need time to sleep, just eat, hydrate, rest up and get ready for the race.
“We’re trying to get qualification points based on our ranking,” said Jordan.

Jordan said that triathletes do not get wild card invitations to go to the Olympics, it’s all based on the qualification points. For his part, Brandon Santos who represented Belize at the Commonwealth Games in The Gold Coast in Australia in 2018 echoed his brother’s words.

“I’m feeling pretty good. We got acclimatized to the humidity,” Brandon said. “We’re ready for the race on Sunday morning.”

Temperatures in Huatulco are lower than in Belize so, the swim will be quite demanding, but Trejo said that he and the Santos had the opportunity to train in Ecuador in 2019 and that the water there is colder than in Huatulco.

“The swim, it’s gonna be open water swim. It’s going to be colder temperature of water as well. In Huatulco, we should be swimming in the mid to low sixties. We swam in colder temparatures in Ecuador like right under 60 degrees, between 56 and 58 Fahrenheit.