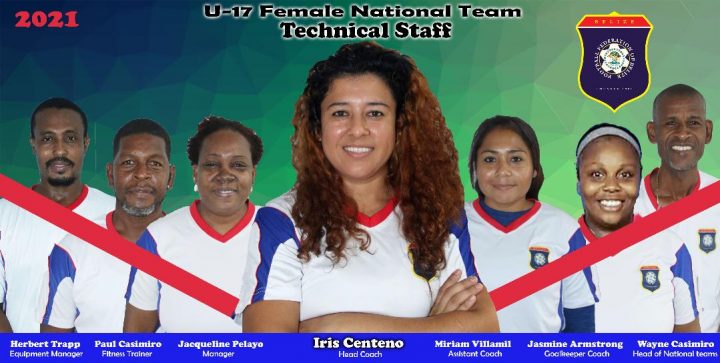 Centeno will be coaching the U-17 Belize Women’s National Team (BWNT).

“Centeno has been chosen to lead the team as they prepare for the upcoming Concacaf U-17 Championship Qualifiers being played in August,” said an FFB statement.

“Her qualifications include Concacaf “C” and “D” Licenses and she has vast experience in working with National teams.”

The players of the U-17 BWNT started working under Centeno on Friday, June 11, at the FFB Headquarters in Belmopan, the same day Concacaf held the U-17 tournament draw in Miami.

Belize was drawn in Group B and will play against Barbados, Curacao, and Saint Vincent and the Grenadines in the 2022 Concacaf Women’s Under-17 Championship Qualifiers.

Concacaf said the Qualifiers will be played in round-robins in August of 2021 but has not yet announced the dates nor the venue.

The other countries were drawn into the following groups:

The four group winners will advance to the knockout stage of the Concacaf Championship which qualifies three teams to the 2022 India U-17 Women’s World Cup.

The FFB is hoping that Centeno, who was assistant coach of the U-17 National Team which advanced undefeated to the second round of the 2019 U-17 World Cup qualifiers, carries the team farther.

After a playing career which led her to the “A” BWNT but which was stunted by injury, in 2016, FFB National Technical Director, Mexican Renan Couoh, introduced Centeno to coaching.

She first coached the Mid-South U-15 girls selection winning the National Districts Championship. In 2017, she was named National Assistant Coach for the U-18 Women’s National Team representing Belize in a Central American tournament in Nicaragua.

Thereafter, the FFB named her National Director of Women’s Football during which time she has earned her Concacaf “D” and “C” football coaching licenses.