Over 40 new recoveries from COVID-19 reported

By Rubén Morales Iglesias: Nicaraguan police have arrested four opposition leaders plus ex-Sandinista officials who have turned on President Daniel Ortega in what is considered a crackdown to help the Ortega government retain power in the November elections, according to a Reuters reports.

Ortega is seeking a fourth five-year term in November.

Ortega’s main challenger Cristiana Chamorro was arrested on June 2 once she announced she would participate in the elections.

Chamorro was accused of money laundering and “ideological falsehood,” a charge reportedly related to falsification of documents said Reuters. Chamorro has denied these charges.

“I have not seen a case like this, in which all opposition democratic leaders are arrested at once, in my 30 years of monitoring human rights in Latin America,” said Jose Miguel Vivanco, head of the Americas department of the Washington-based Human Rights Watch advocacy group reported Reuters.

“Not even [Venezuelan President Nicolás] Maduro has dared to arrest all opposition candidates at the same time.”

The Reuters article said that in recent months Nicaragua passed laws that make “it easier to prosecute people for receiving foreign funding and for publishing leaked or “false” information. Law 1055, passed late last year, allows candidates to be barred from elections if they have spoken in favor of U.S. sanctions.”

“The law is tough, but it’s the law,” said Vice President Rosario Murillo, Ortega’s wife, who, critics of the Ortega government, consider will become his successor should Ortega stay in power.

Ortega has been in power for 25 years in Nicaragua. His first stint lasted 11 years after gaining power in 1979 when the Sandinista rebels overthrew US-supported right-wing dictator Anastacio Somoza.

Violeta Chamorro, the mother of the arrested Cristiana Chamorro, beat him in elections in 1990.

Ortega returned to power in 2007 and has been reelected twice but his three terms have been controversial and questioned by the international community.

In 2018, the Nicaraguan government cracked down on anti-government protesters leaving more than 300 people dead.

Now, after the recent arrests, last Tuesday, the Organization of American States passed a resolution that demanded that the Ortega government releases all potential electoral candidates and political prisoners. The OAS resolution also demanded reforms to guarantee free and fair elections.

The United States and other countries should pressure Nicaragua to release the arrested opposition candidates said, Vivanco.

“They need to increase the pressure dramatically,” Vivanco said.

The United States already imposed sanctions on members of the Nicaraguan government including Ortega’s daughter, but some sectors are calling for broader sanctions.

“They should try through diplomatic rapprochement to offer incentives for Ortega to make certain concessions in electoral institutions or the release of pre-candidates in exchange for possible lifting of sanctions,” said Breda.

But Breda also said that if the United States, which is trying to curb Central American migration from the “Northern Triangle” – Guatemala, Honduras, and El Salvador – through the strengthening of democracy, respond with broad sanctions, despite Nicaragua not being a major source of migration, it could destabilize the region.

“Central American leaders see themselves in their neighbor’s mirrors, and a failure by the United States in Nicaragua could be seen as a weakness that emboldens others to follow an anti-democratic agenda,” said Breda.

The obvious reference being Salvadoran president Nayib Bukele who is seen as rejecting US criticism of the Central American record on democracy and human rights said Reuters. 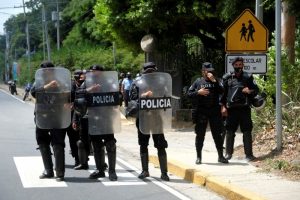 But while Chamorro is under house arrest, the opposition said they cannot give up.

Jose Antonio Peraza of the opposition “Blue and White National Unity” association of groups calling for protests, said the electoral process had been undermined but the opposition would seek other candidates.

“The dictatorship wants everyone to say ‘It’s over… but we cannot give up,” said Peraza.

Peraza said that despite the election process being undermined by Ortega, they would look for other candidates.

“We have no other alternative,” Peraza said.

“Their game is to stay in power for the rest of their lives at pretty much at any cost, and you need to increase the cost,” Vivanco said.