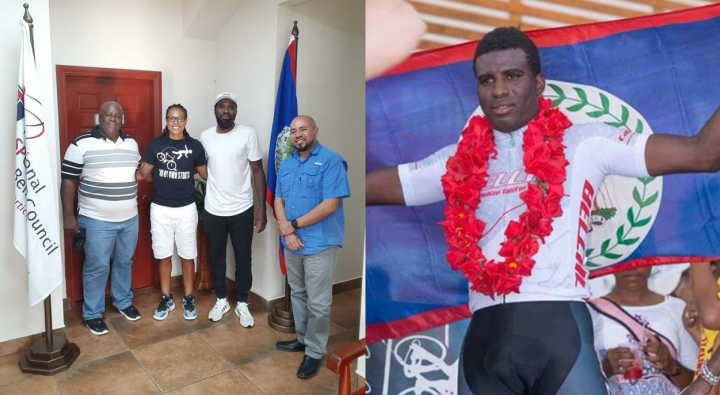 The NSC announcement came shortly after the Cycling Federation of Belize (CFB) announced that Williams “is now eligible to compete in our National Championships and for selection to our National Team to represent Belize in international events,” after changing nationality affiliation with the Union Cycliste Internationale (UCI) and USA Cycling.

The NSC made the announcement in a Facebook post in which it said Williams “stopped in at our office at the Marion Jones Sports Complex to discuss moving Belizean cycling to another level.” The NSC’s post made reference to the CFB’s press release that announced Williams change of nationality affiliation with the international sporting bodies.

“We are honored to officially announce that Mr. Justin Williams has completed the process of nationality change with the relevant authorities namely the UCI (Union Cycliste Internationale) and USA Cycling,” said the CFB.

“Mr. Williams has obtained an international license issued by his membership federation USA Cycling with a Belizean Nationality.”

“With Justin’s cycling resume, his contribution to the development of the sport of cycling over the years and his ambition to move Belizean cycling, the National Sports Council is elated and overwhelmed that he has opted to represent Belize,” the NSC said.

Williams becomes the big contender for the 87-mile National Road Championship to be run on Sunday starting at 8:00 am.

“From the Crooked Tree junction, it enters into the John Smith Road from the Philip Goldson Highway, goes through the Boom Road, enters the John Smith again. We do one more lap and finish where we did the time trial,” said Orson Butler, president of the Cycling Federation of Belize.

After riding professionally for US teams both in the US and Europe, Williams, founded his own team L39ION in Los Angeles, California. He continues riding at the pro level in the United States along with brother Cory who has also competed in the Holy Saturday Cross Country.

Williams has won 11 US National Championships.

Ha has also competed in the races in Canada, Lebanon, Qatar, Oman, and Uruguay.

Recently, on Friday, June 11, Williams won the Tulsa Tough race in Tulsa Oklahoma, leading his team L39ION (pronounced Legion) in one of the US national criterium races.