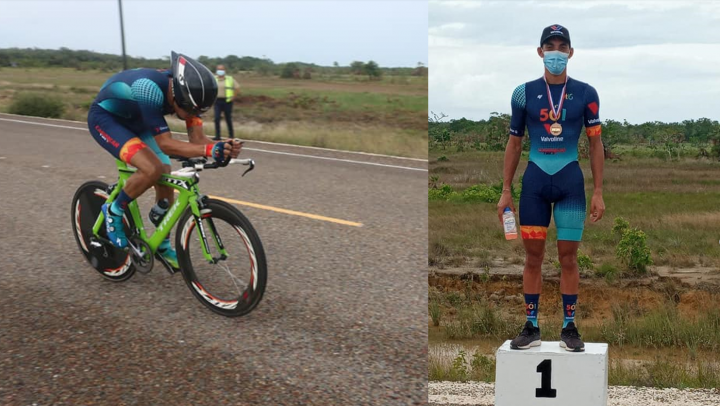 Quiroz is hungry for the win but says the lack of competitive cycling for more than a year has taken its toll on the riders. Plus, despite the advantage of training in the hills, he feels he has to ride an intelligent race particularly because of the crosswinds in the open John Smith Road.

The Men’s Road Race Championship will cover 87 miles while the Women’s and Juniors’ will run 57 miles.

“From Crooked Tree junction, it enters into the John Smith Road from the Philip Goldson Highway, goes through the Boom Road, enters the John Smith again. We do one more lap and finish where we did the time trial,” said Orson Butler, president of the Cycling Federation of Belize.

“Considering that cycling is just reviving, training has not been continuous, and to have the body get used to a start-up season halfway through what would be a regular season right after [the Holy Saturday] Cross Country, it’s kind a strange,” said Quiroz in an exclusive conversation with Breaking Belize News (BBN).

“My body’s response, despite the preparation, is not quite there, but after the breakthrough I had in 2019 I think I still stand at a very good level. It was a matter of reviving the muscle memory again. I feel like I’m not to shabby right now. I have to play it smart,” Quiroz said.

“We’re still not so sure where we stand, where the competition stands, but since the announcement that the sport was being reactivated at least all of us have [run] a couple miles.”

Quiroz said he didn’t know if defending champion Ron Vasquez was going to run because he is back and forth from the United States, but Vasquez would be someone to consider because you can never underestimate a defending champion.

Who are the other guys to watch on Sunday?

“Giovanni Lovell is pretty much a very good contender, he is never out of it. Am I missing anybody?”

Well, he missed Justin Williams, but we must give Oscar a break there. Nobody really knew that Williams was coming to run the race but after changing nationality affiliation with the UCI which now allows him to run national championships and even to represent Belize internationally, Williams is going to suit up on Sunday.

And Williams certainly is a contender. A big contender. Particularly after having won the 2015 and 2018 Holy Saturday Cross Country Cycling Classics.

But today, Oscar was well aware of Williams’ participation.

“Well, he is the biggest threat now, he’s taken the pressure off me,” Quiroz said.

But apart from the big guns, Quiroz thinks the young cyclists are going to put up a good fight.

“In Cayo, we have guys like Shane Jones and younger guys who can stir up things. We have some upcoming juniors transitioning to the U-23 who stand a good chance.

“I think we’re going to have quite a number of new faces who can show themselves in this race.

“I expect a very good race on Sunday,” Quiroz said.

Quiroz is hoping that with his 501 Valvoline Cycling Team comprised of Joslyn Chavarria, Henry Moreira, Joshua Fuller, Mairon Muñoz and Shamin Burns, they can take the race.