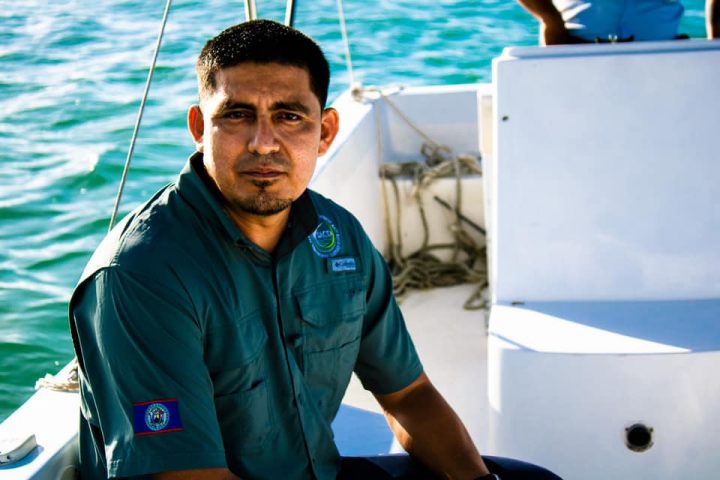 By Zoila Palma: Every month, the U.S. Embassy in Belize highlights outstanding Belizeans.

For the month of June, the U.S. Embassy’s conservation spotlight is on Joel Verde.

Verde is the Executive Director of the Sarteneja Alliance for Conservation and Development (SACD) and chairs the Association of Protected Areas Management Organization (APAMO).

Joel was also recently nominated and appointed the CBO representative in the Protected Areas Conservation Trust (PACT) Board.

Joel was born and raised in Sarteneja. His father was a fisherman, and he credits his experiences on the ocean with his father for fueling his passion for the environment.

He recalls being captivated by the fish swimming in the water around the coral reef, to which his father told him, “I didn’t bring you out here just to watch the fish.” While he worked temporarily as a fisherman initially, it was the part-time tour guide job he joined in 2005 that he says led him to where he is now.

During his time chairing the Sarteneja Tour Guide Association (STGA), Joel developed a first-hand understanding of the connection between the area’s natural resources and the tourism industry and its importance to the livelihoods of those in his community.

Looking to create opportunities for the local communities while promoting sustainable resource management and conservation of the nearby Corozal Bay Wildlife Sanctuary (CBWS), he helped establish the Sarteneja Alliance for Conservation and Development.

Founded in 2008, SACD is an alliance of different community groups and stakeholders from the Corozal district.

The organization promotes a balance of conservation and community needs in the region, ensuring adequate management of the CBWS while developing supplementary sources of income for members of the community. In its short existence, SACD has built a reputation at the national and international level, and their work has earned the protected area the label of one of the best managed areas in Belize.

After 13 years with the organization and filling every role needed, Joel maintains his work is not a job – it is part of his life.

In promoting conservation, he feels a sense of responsibility to ensure future generations are able to enjoy the world that he enjoyed growing up in. “Change starts with us,” he states, “and everyone needs to do their part.”