‘She initiated the jump and I just took it all the way to the tape,’ Alicia Thompson on beating Kaya Cattouse in the Women’s Cycling National Road Championship 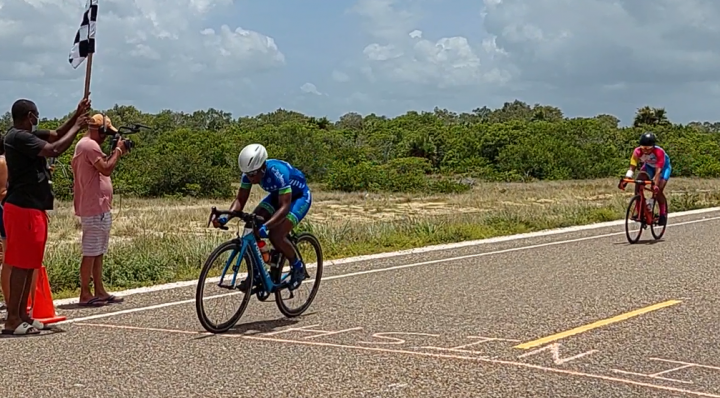 By Rubén Morales Iglesias: “She initiated the jump and I just took it all the way to the tape,” said Alicia Thompson after regaining the Women’s Cycling National Road Championship.

At 40 years of age, Alicia is not a newcomer to the sport of cycling having claimed quite a number of races over Kaya Cattouse, including the National Road Championship in 2018, though she recognizes that her rival is more well-known than her.

“When you look at cycling, and, yes, I have my fans and kudos to my fans, but the name that is called the most is Kaya Cattouse. Her name is out there in the sport of cycling. I think the only time you really hear from Alicia Thompson is when she wins a race, and she gets an interview.”

But, on Sunday it was Alicia’s day.

“Kaya along with myself I think we can be considered sprinters. When you’re coming to the tape it’s all are nothing at all. And I gave it my all,” Alicia said.

“[On Saturday], I was out here, in the heat, checking my distance where I would jump from. And it just so happens that Kaya took off at the exact spot that I was practicing.

“So, I knew exactly where I needed to jump from and she initiated the jump and I just took it all the way to the tape,” Alicia said.

“I didn’t have it when we came down to the sprint,” said Kaya.

“Alicia had the better legs coming down to it, in the sprint finish.”

Kaya, still recovering from a fall a week and half before the National Road Championship figured that if she was to have a chance against the very experienced Alicia, she had to move early.

“I actually still have stitches in my elbow, you know, bruises, and gashes all over the place. But my idea in the sprint was to jump from farther than I usually do, so I would be able to sit down and drive it to relieve that pressure off my shoulder. You know, because it’s painful to be out the saddle and trying to move the shoulder as the range of motion has been affected by the accident. So that was my plan, but I went from a little too far to be able to hold it until we got to the finish line.

Alicia said she was caught between the two.

“I myself was just caught in the middle of those two trying to get at each other because Nicole won the time trial [last Sunday] and Miss Kaya being the defending champion of the national road race, I guess [Nicole] just made sure that there was a battle between those two. So, all I had to do was to, basically, know which one of them to go with and Kaya made the move. So, I would either decide to stay there with Nicole or go with Kaya.”

And Kaya made the move to shake of Nicole just 17 miles into the 57-mile race which started at the Crooked Tree junction and was then going one lap on the John Smith Road-Boom Road circuit.

“Just after the first speeding zone, which is at the Boom Cut-off. Yes, that was early. So, it was a long run for home. It was three of us that got away. Young and upcoming Gabrielle Gabourel along with myself, and Kaya. We got away and Gabrielle she held on as long as she could. She did her pulls. So, kudos to the rising star. She’s coming up and she’s going to be a great competitor.”

Since the race is on open roads, particularly the new John Smith Road, the riders had to contend with strong winds all the way.

“It was a pretty tough race. The element of the wind was what made the race extremely hard, riding into either a headwind or a crosswind. I think that was the biggest factor in today’s race,” Kaya said.

At the end of it all, Alicia claimed the title again, but she didn’t forget her great rival.

“Thank you, Kaya for a great race today. It was a very, very competitive race,” said the champion.