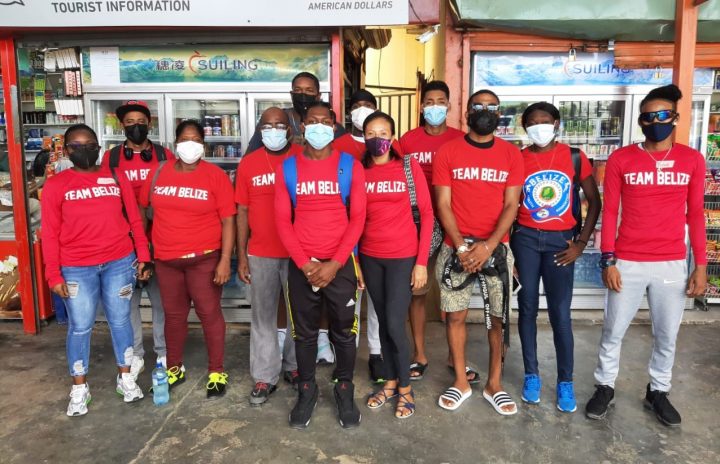 By Rubén Morales Iglesias: A team of 16 athletes will be representing at the CADICA Athletics Championships in San Jose, Costa Rica, this weekend and at the same time they’ll be attempting to qualify to the Olympics.

Thirteen plus three officials left today and three will fly from the United States.

Originally the Belize Athletics Association (AA) planned on sending 22 athletes, but yesterday announced that it had cut seven. Today, BAA president Deon Sutherland confirmed that the BAA added Ana Lopez-Camp to the team.

The BAA said yesterday it doesn’t have the money to send the 22 athletes it had selected to represent Belize at the CADICA Championships to San Jose, Costa Rica, so it had to cut down on the total.

Last week Wednesday, June 16, the BAA posted a release on Facebook saying that Belize’s team to the Central American Championships on June 26-27 was comprised of 16 men and six women.

“The executive of the BAA regrets to inform some of its athletes that due to financial constraints, we are unable to take the team we had originally planned to represent at the Central American Senior Championship to be held in San Jose, Costa Rica on 26-27 June, 2021,” said the BAA on Wednesday.

“The high cost of attending these events due to the protocols instituted by the organizers and governments have made it very difficult financially, coupled with the fact that the government and business community cannot assist with donations at this time.”

Just recently the BAA spent quite a bit sending a cross country team to the Central American championship in Guatemala and another contingent of athletes to Querétaro in Mexico to compete in the Mexico National Senior Championships.

“We looked at the results of the events over the past six months and then we looked at the qualifying standards per se, in terms of who would meet close to the marks that were set last year. From that we were able to determine who to select. It’s a difficult process but we had to do something,” said Sutherland.

The women who are traveling to the regional championship in Costa Rica are Samantha Dirks, Hillary Gladden, Tricia Flores, Leonellie Myers, and Ana Lopez-Camp.

Sisters Ashontie Carr and Ashantie Carr, who are studying in Jamaica, were cut.

A contingent of 16, 13 athletes, and three officials left Belize today by road to Guatemala City and then take a flight to San Jose on Friday.

Samantha Dirks, Brandon Jones, and Shaun Gill will fly from the United States to Costa Rica.

The team is accompanied by Sutherland, and coaches Fred Evans and Shelmadine Carr.

The BAA said that though the seven had to be cut, they’ll still have other opportunities.

“We therefore encourage you to continue training and be prepared for the other events coming later this year,” said the BAA’s release in Facebook.