‘No victory’ over trade unions, P.M. says as Government squares up for a lawsuit

FFB kicks off scouting for U-20 Men’s, Women’s National Teams on Saturday in PG 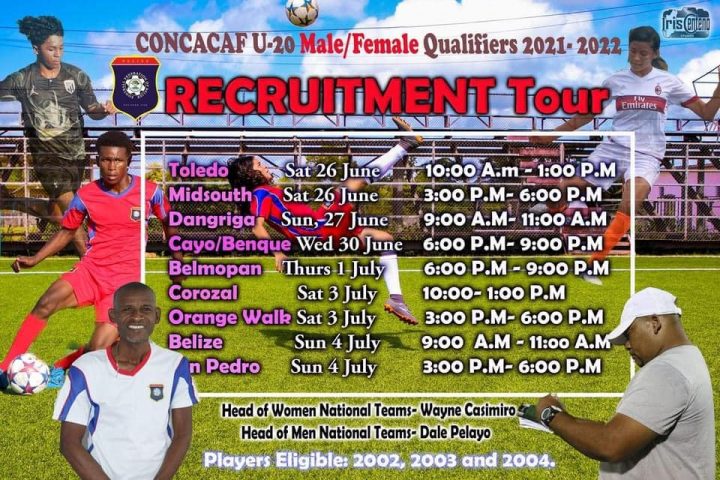 By Rubén Morales Iglesias: U-20 National Team coaches Dale Pelayo (Men’s) and Wayne Casimiro (Women’s) on Saturday kick off a nationwide tour to scout new players for the U-20 National Teams which have international tournaments later this year.

“The objective is to find U-20 players for the U-20 selection which will be participating in the Uncaf (Central American Football Union) tournament in November,” said the U-20 Men’s Team head coach Dale Pelayo.

“Uncaf hasn’t set the location as yet and they haven’t had the draw, but we are starting preparation for the team one time, instead of having to wait until close to November. So, I asked the Technical Director [Philip Marin] and the Federation if we can go out and start to recruit players one time for the U-20 Men’s and Women’s teams.”

“We’re going through the whole country. We start off on Saturday morning in Punta Gorda from ten until midday. We’re going split the time to scout the players.”

The local Toledo Football Association has been asking local players to show up for the scouting sessions at the Victor Sanchez Union Field on Saturday.

“On Saturday afternoon we go to the Midsouth in Independence. And Sunday morning we do Dangriga.

“Next Wednesday, June 30, we do Cayo and Benque, on Thursday, July 1, we do Belmopan.

Pelayo added that he’s planning for the Belize Men’s “A” National Team.

“Getting things planned out and trying to see how we can sit down as well with the Federation and plan forward for the national team too,” he said.