Deaths from COVID-19 in Latin America and Caribbean closing in on 2 million; just ten percent of residents of region vaccinated

Andrew Ashcroft tells side of confrontation with Jasmine Hartin; denies he’s keeping her from their children 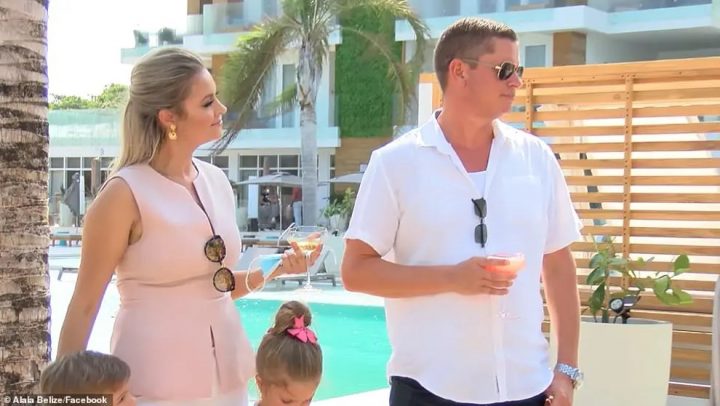 By Aaron Humes: What purports to be a statement by Andrew Ashcroft, the general manager of Alaia Belize Resort on Ambergris Caye, concerning events there on June 22, involving former partner Jasmine Hartin, 32, has been posted to social media by Channel 7 News.

The statement is dated June 25; however, it is not made clear if this is a general statement to the press or one to police.

According to Andrew, 42, he was alerted by general manager of Grand Colony Island Villas, Frank Habet, on the afternoon of June 22, around 12:47 a.m., to a disturbance at the Grand Colony. He arrived, he said, to see his former partner yelling at the security to let her in to get her personal effects and see their children, accompanied by her mother, Candice Castiglione.

Staying well away, he says, he went to seek legal counsel by phone then headed for the kitchen area of the Alaia property, promptly followed by Candice and Jasmine whom he says kept up their yelling and demands while filming on a phone camera. He says he did not engage them despite being concerned about the disturbance their actions were causing.

Andrew says he went to pick up the twins at the Alaia Restaurant deck, a private area, and thereafter into the kitchen and then onto a boat near the deck as all the while Jasmine yelled, screamed and threatened the security, vowing to see her children that day. She even tried to follow him onto the dock but was restrained.

According to Andrew, they took a 30-minute boat ride and on their return the children and their nanny went to the playroom in the conference room across the street from Alaia and he returned to his office. Shortly thereafter he was alerted that Jasmine and four unknown heavy-set men were coming on a golf cart toward the restaurant, only to turn back when they saw him. He thereafter took the children home, believing that she was coming to take the children by force that day.

Andrew Ashcroft denies that he ever told Jasmine she could not see her children and recounted that he twice in fact took them to see her in the Cayo District where she was staying. On the second occasion, he said, he found that Jasmine had abandoned the property he had arranged for her to stay at without informing anyone, including police. He further claims that Jasmine has ignored efforts to set convenient times, dates and places for visitation with the children, choosing to make unreasonable demands, show up without prior notification, and in the case of the June 22 incident, inviting hometown newspaper the San Pedro Sun and other press to be present “to deliberately make a scene.” He does not, however, say who has formal custody if any nor details what arrangements exist if any.

Hartin is out on bail with a new surety after being charged with the assault of an employee of Grand Colony during the June 22 incident and separately with possession of a small amount of cocaine following the May 28 shooting death of Superintendent of Police Henry Jemmott. The Supreme Court maintained her bail while allowing Habet to withdraw as surety and denying efforts to revoke her bail based on the new charges.

Hartin’s new attorney Richard “Dickie” Bradley denies his client assaulted anyone, and says that she was desperate to see her children and that authorities have tried to railroad her by alleged unethical and immoral practices.