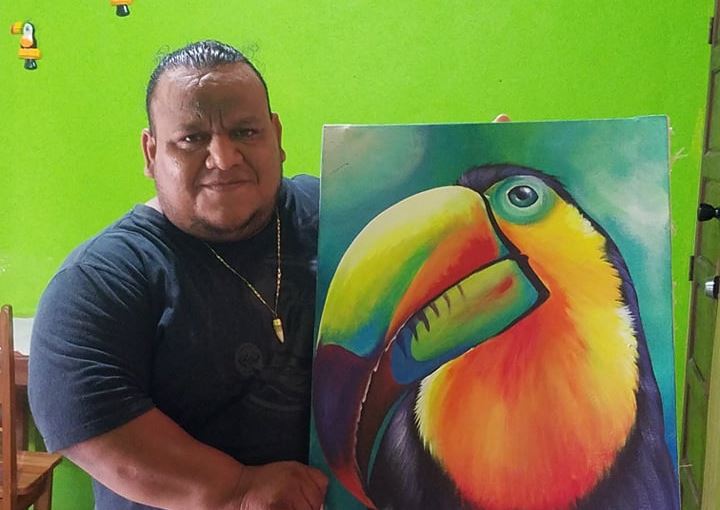 By BBN Staff: While the small community of Bullet Tree in the ecologically rich Cayo District of Belize may seem to an outsider like any number of other small tropical villages, Jorge Landero knew from an early age that he wanted to share what he saw with the rest of the world. He started painting from a very early age, and he still finds much of his inspiration in the world around him. The Mopan River — which cuts alongside the village of Bullet Tree — is a common muse in his paintings.

Landero’s passion isn’t derived from a provincial sense of familiarity. Jorge ventured after elementary school to Guatemala where he took art and painting courses which would become formative in developing his sense of style. After completing the curriculum, he returned to his hometown with newly developed techniques and proficiency. He’s put those skills to good work — capturing a sense of the diversity of Belize and rapidly developing into one of the premier names in the Central American country’s art scene.

But what’s especially compelling about Landero’s art is how deftly he transitions between different styles — all in service to subject matter that other artists may pass off as insignificant. Landero may have honed his skills in art school, but his passion was ignited years earlier by a friend named Papo. Papo’s subject matter tend to occupy the resort island of Ambegris Caye, and you can see hints of his vibrant sea-and-sun tones in Landero’s own art. Today, the two share space on plenty of spaces throughout Belize.

In fact, you can hardly walk into a resort without seeing a piece of art from Jorge Landero somewhere. His art has become practically synonymous with the aesthetics of the Belizean art scene even as his sense of style stretches against the boundaries of what critics expect it to be. Nature is the clearest sense of inspiration from Landero, but his lush shades and bold definitions have something mythic to them as well.

Landero may be a local celebrity, but his process is as humble as it’s ever been. As a night owl, Landero finds that creativity comes best between 2 and 4 AM — a decision that perhaps has a role to play in the dreamlike quality of many of his paintings. It’s a process that may seem strange to others, but it’s one that’s served him well in his three decades as an artist.