By Benjamin Flowers: Leader of the Opposition Moses “Shyne” Barrow, who has been very vocal in his call to end Patrick Faber’s tenure as leader of the United Democratic Party, has taken his position to the next level with an aggressive anti-Faber social media campaign.

Last night, Barrow made a post on his Facebook page titled “VOTE NO!!! FABER MUST GO” detailing Faber’s rise as leader of the UDP, and stating in no uncertain terms why he feels that Faber’s time at the helm has passed.

“It would have been best had Mr. Faber done the honorable thing and resigned rather than force himself on a majority of the UDP that does not believe in his leadership,” Barrow said. “It is abundantly clear we want and need new leadership in order to reform and rebuild the UDP.”

Barrow stressed that being a leader is about empowering those under your leadership, but that Faber can no longer do that, as such, he is calling on delegates to vote Faber out at the upcoming leadership convention scheduled for July 11. 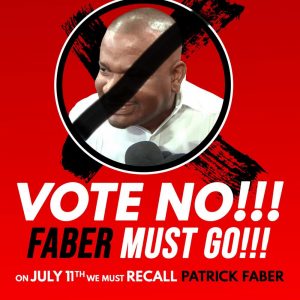 Barrow has lead the charge for Faber’s removal since a video of him reacting violently in a domestic situation surfaced at the end of May. He landed a decisive blow to Faber’s leadership at the end of June when he replaced Faber as the Leader of the Opposition in the House of Representatives. Barrow maintains that his actions supersede himself and are for the good of the UDP as a whole, and feels the party has no chance at winning another election if Faber remains party leader.