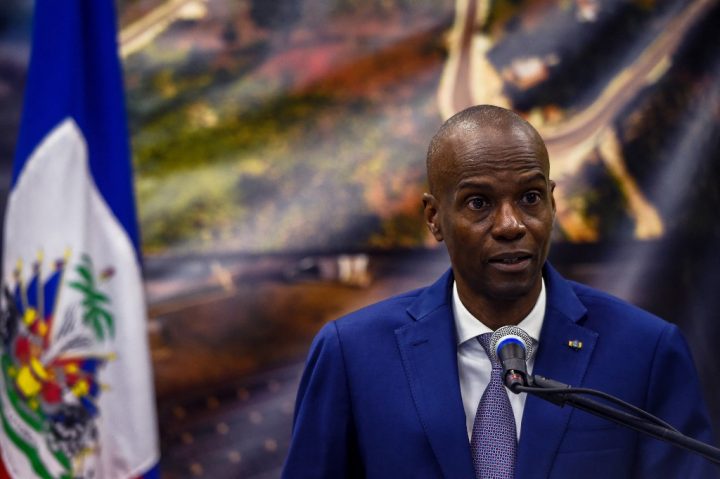 (FILES) In this file photo taken on January 7, 2020 President of Haiti Jovenel Moise speaks during a joint press conference with the Secretary General of the Organisation of American States (OAS) in Port-au-Prince. - Haitian President Jovenel Moise was assassinated on July 7, 2021, at his home by a commando, interim Prime Minister Claude Joseph announced. Joseph said he was now in charge of the country. (Photo by CHANDAN KHANNA / AFP)

By Benjamin Flowers: Four suspects believed to be involved in the assassination of Haitian President Jovenel Moïse early Wednesday morning have been gunned down by police, reports Yahoo News.

Haitian National Police Chief, Léon Charles, said that the men were shot and killed by police last night, while two other suspects have been arrested. Three police officers who were being held hostage by the suspects have been freed during the operation.

Moïse, 53, was shot numerous times and died on the spot at his Port-au-Prince home around 1:00 a.m. on Wednesday. His wife, first lady Martine Moïse, was also injured in the attack and was airlifted to Florida for emergency medical treatment. She is listed as being in stable but critical condition.

Haitian Ambassador to the United States Bocchit Edmond described Moïse’s assassination as “well-orchestrated” and said that it was carried out by “foreign mercenaries and professional killers,” noting that the assassins were dressed as United States Drug Enforcement Administration (DEA) agents.

Claude Joseph, who is serving as interim Prime Minister, announced Moïse’s death and assured that the situation was under control. Notably, Moïse, who dissolved parliament in 2020 and ruled by decree since, had dismissed Joseph, and was set to install Ariel Henry as the Haitian prime minister on the day he was killed.