Prime Minister completes meeting with Secretary-General of the United Nations 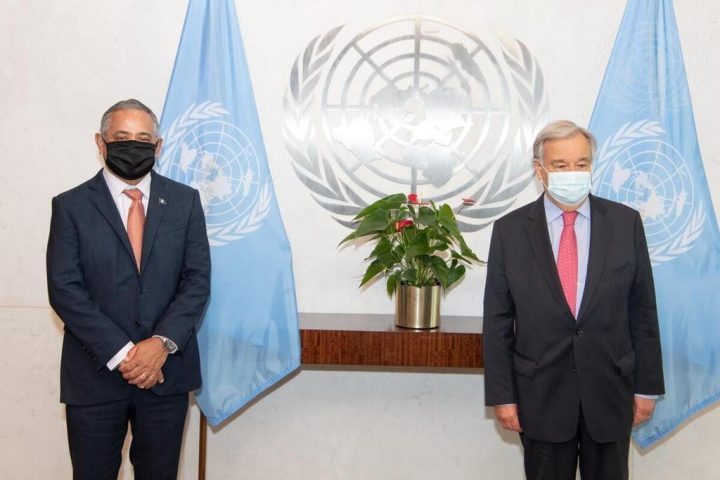 Secretary Guterres expressed the UN’s commitment to continue assisting Belize. He also commended Belize’s leadership within CARICOM and congratulated Belize for being elected to the United Nations Economic and Social Council, a Government press release states.

The Prime Minister meanwhile expressed thanks to the Secretary-General for his work in advancing issues related to the equitable and just distribution of COVID-19 vaccines, keeping climate change at the forefront of the international agenda, and discussed the urgent need to access concessionary financing for Small Island Developing States for the post-COVID-19 pandemic recovery.

The Prime Minister also briefed the Secretary-General on Belize’s preparations of its counter-memorial to be filed at the International Court of Justice (officially an arm of the United Nations) and on bilateral relations with Guatemala.

Concerning threats posed to Small Islands Developing States, the Secretary-General reiterated his commitment to continue championing the call for more assistance for climate change mitigation and adaptation and recommending raising financial assistance for adaptation to 50 percent. On the equitable distribution of COVID-19 vaccines, the Secretary-General has called for the production and distribution of 11 billion vaccines to all developing countries in order to ensure that everyone has access.

The Prime Minister and the Secretary-General exchanged views on the delicate situation in Haiti and noted the need for an urgent resolution of the crisis.

Briceño extended an invitation to the Secretary-General to visit Belize sometime in the near future.

Belize’s delegation to New York is rounded out by Eamon Courtenay, Minister of Foreign Affairs, Foreign Trade and Immigration; Carlos Fuller, Ambassador and Permanent Representative of Belize to the UN; Ambassador Stuart Leslie, Cabinet Secretary and chief of staff in the Office of the Prime Minister; and Alfonso Gahona, minister counsellor.