Italy crown themselves European champions in penalty kicks over England 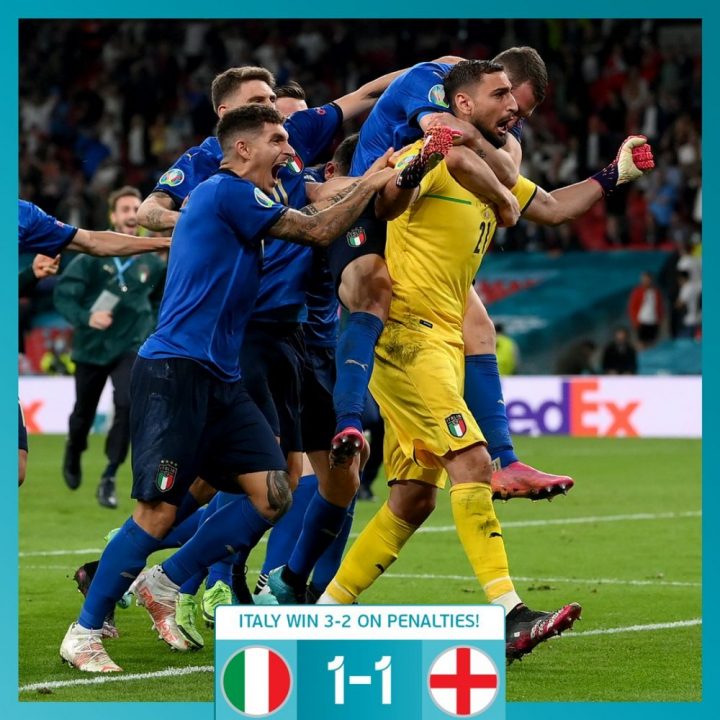 By Rubén Morales Iglesias: Italy won the Euro 2020 in penalty kicks over England in a very even final at Wembley in London, England in front of a packed stadium as Gianluigi Donnarumma stopped Bubayo Zaka’s penalty kick.

After a 1-1 draw in regulation and extra time, the Euro 2020 Final had to be decided in penalty kicks.

Then, Andrea Bellotti missed for the Italians, but Harry Maguire converted putting England ahead 2-1. But then everything went bad for England as Marcus Rashford, Jadon Sancho, and Saka missed while Italian captain Leonardo Bonucci and Federico Bernardeschi converted.

Despite Pickford saved penalty kicks, England’s inability to score put them out.

In effect, England lost their own game by giving up the ball when they went ahead and then by making the wrong changes in the end. Rashford and Sancho were put into the game to take the penalty kicks, and it didn’t play out for them.

Italy had not won a Euro Cup since 1968, 53 years ago. This is just their second title.

For England, this was their first Euro final. Their last title was the 1966 World Cup won at Wembley.

England struck first in the second minute when Luke Shaw booted in his first international goal ever.

Shaw himself started the attack on the left pushing the ball forward. Harry Kane extended to Kieran Trippier who moved up and made a long cross to the left where Shaw nailed Donnarumma for the extremely early England 1-0 lead.

And then England made what in retrospect was a bad decision, they gave up ball possession to Italy.

The Italians took control of the play, made several changes, and they got their reward in the 67th minute.

Captain Bonucci tapped the ball, which bounced off the post after clearance by Pickford, into the net for the 1-1 draw. Before Pickford’s unfortunate clearance the English defense had been unable to steer the ball away from their defensive area after an Italy corner kick.

Play changed in the extra time with England taking the initiative, but the score remained unchanged forcing the definition by penalty kicks.