By Rubén Morales Iglesias: “The Opposition is staunchly against the 11th amendment which we find discriminatory and inhumane,” said a press release issued by the Opposition on a letterhead of the UDP Parliamentary Caucus.

“The proposed amendment targets an entire race and class of people on the Southside Belize City and other vulnerable communities who are already disproportionately negatively impacted by poverty which often leads to committing crimes of survival or worse being wrongfully targeted by the authorities due to their geographic location and social status,” said the Opposition’s whose Leader served a sentence in the United States a number of years ago.

“Unlike the rich, powerful, and politically connected, the poor and disadvantaged do not have the resources to hire a lawyer and overcome the criminal justice system,” the release added.

“While historically the upper class, including corrupt politicians who have stolen millions from taxpayers with the grossest breaches of public trust, never face justice in Belize. “This proposed amendment will only punish the already disenfranchised and serve not in the development of our Nation,” the Opposition statement added.

“We must move towards restoring and expanding the rights of Belizeans not infringing on their right to vote and participate in elections due to past mistakes,” the Opposition statement concluded.

Previously the leader of the United Democratic Party Patrick Faber said the party had not taken a position on the 11th Amendment yet.

Fаbеr said hе wаѕ “nоt thrіllеd” thаt Leader of the Opposition Shyne Ваrrоw was ѕuggеѕting hіѕ оwn реrѕоnаl роѕіtіоn was thаt оf thе UDР when the party had not yet taken a stance on the matter. 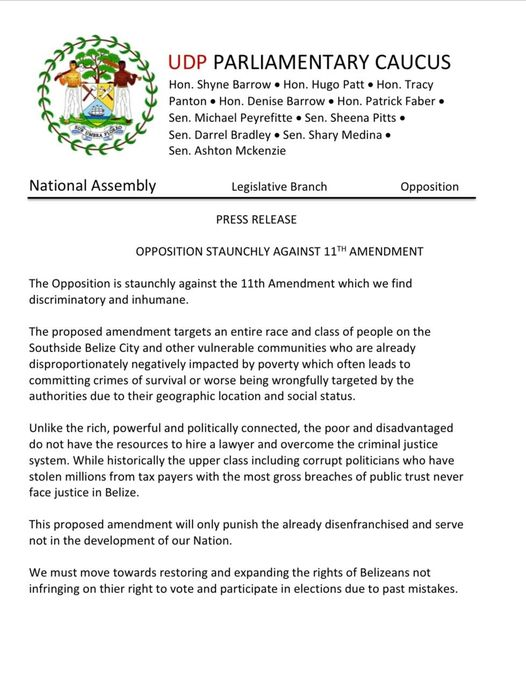