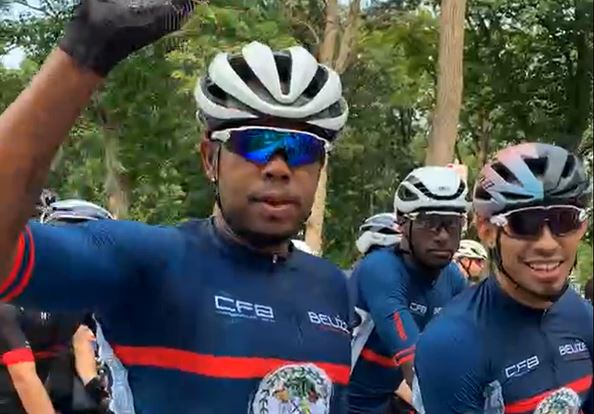 By Rubén Morales Iglesias: Byron Pope is one of seven Belizean cyclists competing in the Intelligentsia Cup in Chicago in the United States.

On Wednesday, Pope of the Westrac Cycling team traveled to the United States along with National Time Trial Champion and Road Subchampion Oscar Quiroz of 501 Valvoline Cycling Team.

Byron Pope of Westrac Cycling is traveling to Chicago to compete in the 10-day Intelligentsia Cup.

Pope, who has represented Belize in Colombia, Guatemala, Mexico, and the Caribbean, said he’s out to experience the difference.

“Yes, I’m well informed that the races are really fast. They are not long races like what we are used to. It’s mostly hour-racing, so the speed is really high. To prepare for that we did some short races and some motor pacing,” Pope said.

Though the Intelligentsia Cup is not really stage racing, it’s quite similar in that it’s nine criteriums spread out through ten days, so you’ve got to be in top condition to complete the entire event.

“I like stage racing because I’m a very mature cyclist and stage racing comes with maturity. After a couple of days my body tends to be stronger than some because of the recovery,” said Pope about his hopes of doing well in Chicago.

“I’m excited because I want to be out there in America and show that Belize has talent too,” he added.

Thirty-one-year-old Pope said that though it’s individual racing, that he and Oscar will ride together as a team along with Giovanni Lovell of G-Flow Cycling Team who traveled earlier.

“We will ride as a team there in the United States. We’ll ride together for the sake of Belize and we are going to try our best to do what we can do over there,” Pope concluded.