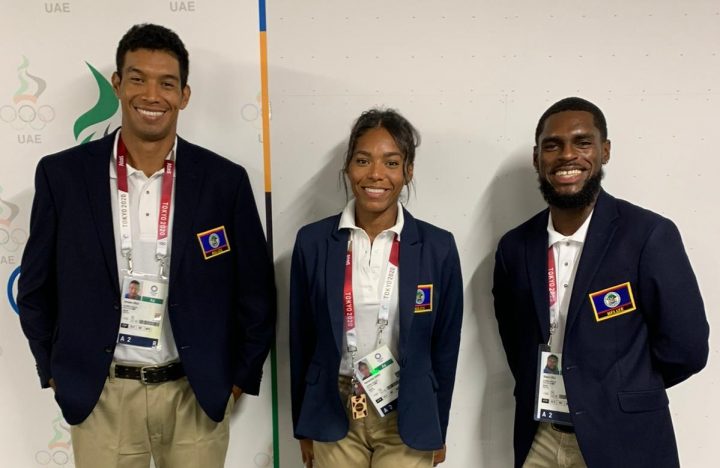 By Rubén Morales Iglesias: “Everyone in good spirits,” wrote Herman Pastor Jr. Belize’s Head of Mission at the Tokyo Olympics in Japan.

Pastor said the Olympic Stadium opened on Monday for training and Belize athletes Samantha Dirks and Shaun Gill were able to train there.

“They did some but since it was the first day the training track was opened, space was an issue,” Pastor said.

Hopefully, over the next few days they get better time and space. Meanwhile, Pastor said that after arriving last Thursday at the Olympic Village from Tachikawa where they were at a 4-day training camp, Dirks and Gill had been training at the Village gym.

Gill will compete in the 100 m (Heat 1) on Saturday, July 31 at 4:45 a.m. Belize time according to the National Olympic Committee.

For his part, Amado Cruz, who is participating in canoeing has been running and doing work at the gym, Pastor said. Cruz arrived on Friday just before the opening ceremonies. Before Japan, Cruz had been training under Spanish Coach Foad Buchta Mohamed at a high-performance center in Seville, Spain for the three weeks in Spain.

Mohamed arrives in Japan on Tuesday. Elvin Penner, president of the Belize Canoe Association should also be arriving on Tuesday.

Belize National Olympic Committee Secretary General Allan Sharp has been with the Belize contingent since Saturday.