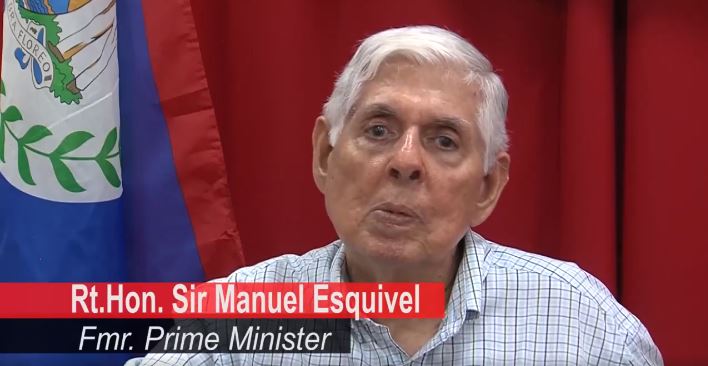 By Aaron Humes:  Content to live out the rest of his years out of the spotlight, former Prime Minister Sir Manuel Esquivel briefly stepped back into it yesterday, Thursday, with the publication of his biography, Still Waters, written by the person who likely knows him best, spouse Lady Kathy Esquivel.

Sir Manuel, 81, rose from teacher to leader of the United Democratic Party (UDP), overcoming two political giants and National Heroes: Philip Goldson, then George Price in the 1984 general election. He served two terms, the first as a builder of capitalist, foreign direct investment and tourism, moving away from Price’s “mixed economy” model. The second was better known for austere times, infamously leading to a freeze in wages, retrenchment of public officers and hard times generally.

The book turned partly into a personal memoir for Lady Kathy, who shared her husband’s triumphs and failure as his foremost partner behind the scenes.

Former UDP chairman Douglas Singh told journalists that the book reveals a man “honest to a fault, genuine to his convictions and true to his cause, but you certainly can’t accuse him of being political savvy” – certainly not when as alleged, he suggested that those who lost their jobs just before Christmas would know better to plan ahead and not overspend and be broke in January.

The author assured neither she nor her spouse had anything to hide, certainly not at the cost of his political or personal reputation. One senses it is the final unburdening of a man who was called to serve his country, did so, and has no regrets – or at least, too few to mention.

The book is available for 9.99 in the Amazon Kindle store for the Kindle reader app, and for 50 dollars Belize at the couple’s business, Price and Company.