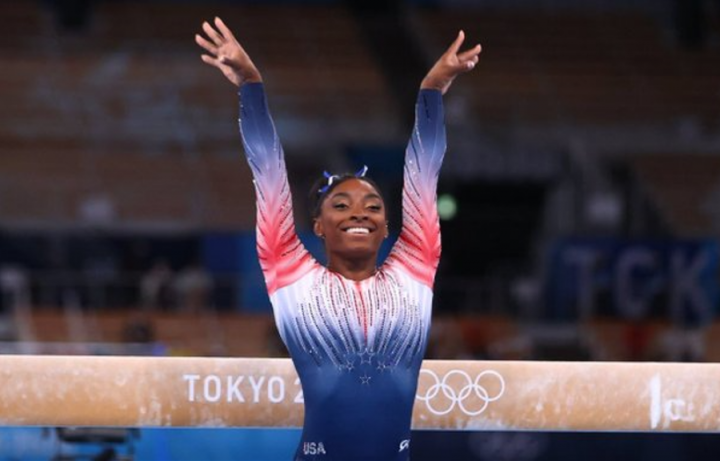 By Rubén Morales Iglesias: After pulling out from four competitions suffering from a mental block condition gymnasts call ‘the twisties’, Simone Biles won bronze in the balance beam on Tuesday at the Tokyo Olympics.

Biles totaled 14.000 points and was in second position behind another Chinese gymnast Tang Xijing who had totaled 14.233. But, then 16-year-old Guan scored 14.633 to claim the gold medal.

“I didn’t expect a medal today,” said Biles who had finished here routine with a big smile. “I just wanted to go out there for me and that’s what I did.”

Biles also won bronze on the balance bean in Rio de Janeiro in 2016.

With the bronze she finishes Tokyo with two medals as she previously won a silver in the team competition the day she pulled out. Biles now has seven Olympic medals.

After suffering from ‘the twisties’ a condition in which the gymnast loses awareness while in mid-air, Biles pulled out of the team competition though she still won silver off her teammates efforts.

Afterwards she withdrew from the all-around individual competition, the vault, the uneven bars and floor, just returning, on her team doctors’ evaluation, for the balance bean competition on Tuesday. But even then, her dismount was changed so that she didn’t have to do twists in mid-air, Biles said it was still difficult because she hadn’t done the double-pike dismount since she was twelve. That was 12 years ago.

“To bring the topic of mental health, I think it should be talked about a lot more, especially with athletes because I know some of us are going through the same things and we’re always told to push through it,” Biles said to reporters after her bronze medal.

“We’re all a little bit older now and we can speak for ourselves. But at the end of the day, we’re not just entertainment. We’re human and there are things going on behind the scenes that we’re also trying to deal with on top of sports.”

Ellie Black of Canada was fourth with a score of 13.866, while Biles’ US teammate Sunisa Lee was fifth. Lee won gold in the all-around gold and bronze in the uneven bars.