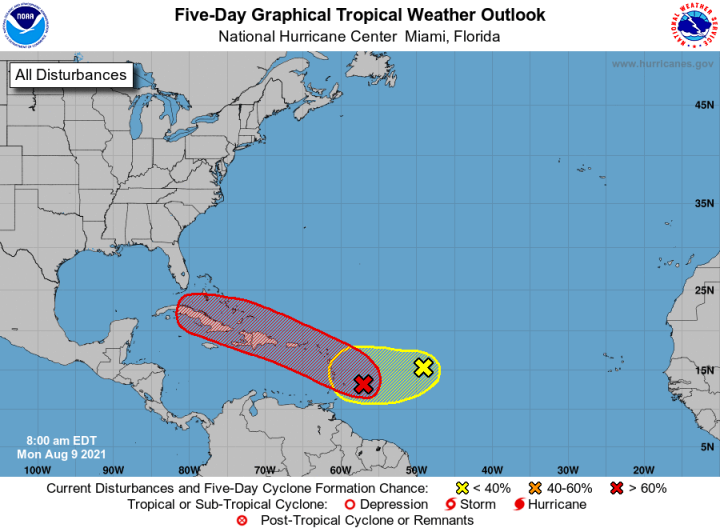 By Rubén Morales Iglesias: The United States National Hurricane Center (NHC) if following two weather systems that developed in the far eastern Atlantic last week and are now close to the Lesser Antilles though looks much more organized than the other.

The NHC, in its Tropical Weather Outlook at 6 am on Monday, said the more organized low pressure system located about 150 miles east of Barbados has showers and thunderstorms that were becoming more concentrated this morning.

“Environmental conditions are expected to be conducive for additional development, and a tropical depression is likely to form later today or tonight while the low moves west-northwestward at 10 to 15 mph,” the NHC said.

The US NHC forecast went on to say that the disturbance was expected to affect parts of the Lesser Antilles tonight. On Tuesday, it’s expected to approach the Virgin Islands and Puerto Rico on Tuesday, and by the middle of the week it should be by Hispaniola (Dominican Republic and Haiti).

The probability of the system developing into a tropical storm within the next 48 hour and throughout the next five days is high at about 70%.

The other system, an elongated low pressure area, has disorganized showers and thunderstorms and is located several hundred miles east of the Lesser Antilles.

“Development of this system is becoming less likely during the next few days while it moves toward the west or west-southwest at around 10 mph,” said the NHC.