Will vaccination be made mandatory in Belize? Cabinet considers!

15 individuals from 4 families displaced by fire in Caye Caulker 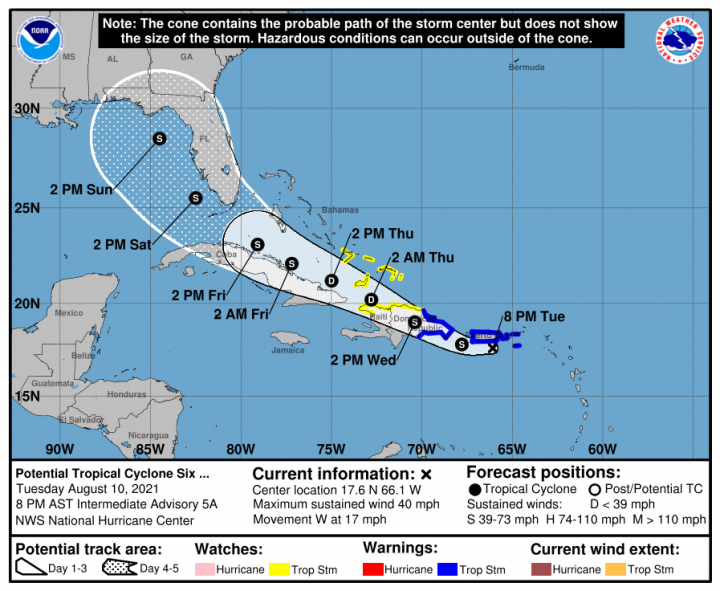 At 6 am on Tuesday, August 10, Tropical Cyclone Six had sustained winds of 35 miles per hour, was located at 16.9 North and 65.5 West, and is moving west-northwest at 17 miles per hour.

The cyclone has a 90% probability of becoming a tropical storm within the next 48 hours and throughout the next five days.

The NHC said in its 3 pm report that tropical storm conditions should affect parts of the US Virgin Islands and Puerto Rico tonight and the Dominican Republic by Wednesday. It also advises that heavy rainfall can cause flash, urban, and small stream flooding and potential mudslides in those areas. The NHC added that the greatest threat of flooding would be in eastern and southern Puerto Rico.

Hispaniola, the Bahamas, and Cuba should expect wind and rainfall impacts during the next several days.

Florida should also be affected by wind and rain by Friday.

Should it become a tropical storm, it will be named “Fred.” 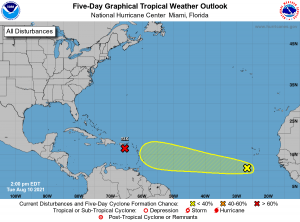 At the same time, the NHC is following a system that is developing in the eastern Atlantic and has a 20% chance of becoming a cyclone within five days. The system is a concentrated area of showers and thunderstorms located a few hundred miles southwest of the Cabo Verdes Islands which is associated with a tropical wave.