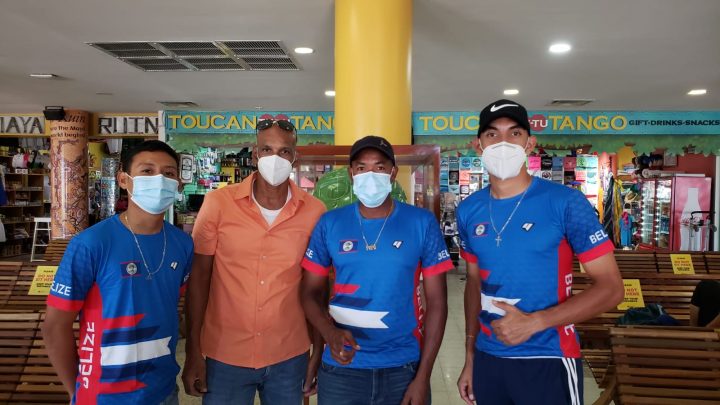 By Rubén Morales Iglesias: “We have the expectation of actually getting a good result and with Justin [Williams] coming on board that’s a plus for the country of Belize to even get better results on this one,” said Oscar Quiroz, 2019 Caribbean Road Race subchampion as he was about to board a flight to Miami on Tuesday en route to the Caribbean and Pan American Cycling Championships in the Dominican Republic.

Both events are qualifying championships to other more competitive championship and the cycling national team is very much intent on doing well at these events which run from August 12-15 in Santo Domingo.

Oscar, Byron Pope, Gian Lino and bicycle mechanic Andrew Ordonez were traveling together ahead of the other cyclists. Kaya Cattouse, Wasani Castro and Henry flew from another city in the United States to Miami. They all met in Miami before traveling to the Dominican Republic. Williams, reportedly flew to Santo Domingo, earlier.

Both events are qualifying championships to other more competitive championship and the national teams are very much intent on doing well at these events which run from August 12-15 in Santo Domingo.

“We have high expectations,” Quiroz said. “The U-23 is a qualifying tournament for the U-23 Pan American games coming up in Colombia in the next few months for the younger guys and the Commonwealth Games coming up next year.”

“We’re expecting to do well. We want to get some qualification spots in the Top 10, and of course if can win it that would be a super result.”

Quiroz said the Pan American Championship should be more difficult than the Caribbean Championship since more countries are involved, but he said they are not impossible.

Belize is participating in the Men’s Elite, Men’s U-23, and Women’s Elite categories in time trial and road races.