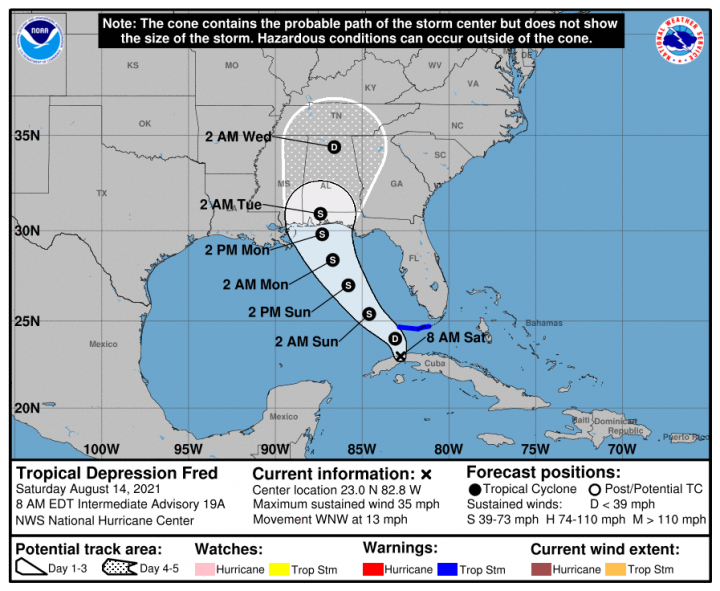 By Rubén Morales Iglesias: The United States National Hurricane Center (NHC) says Tropical Depression Fred is moving over the northern coast of Cuba and though it’s moved to the west it will still affect the Florida Keys with tropical storm conditions later on Saturday.

At 6 am on Saturday, August 14, Tropical Depression Fred had sustained winds of 35 miles per hour, was located at 23.0 North and 82.8 West, and was moving west-northwest at 13 miles per hour.

The NHC said that from Saturday to Monday, “heavy rainfall could lead to areal, urban, and small stream flooding impacts, and cause new and renewed river flooding, across southern Florida, the Big Bend, and the Panhandle”.

The NHC added that tropical storm conditions could affect the Florida Panhandle and coastal Alabama by Monday. 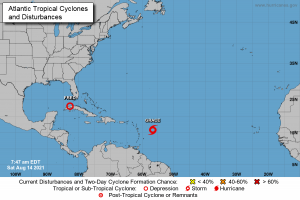 Grace is heading to the Lesser Antilles. Tropical storm conditions are expected by parts of the Leeward Islands by Saturday night and early Sunday and over the US Virgin Islands and Puerto Rico on Sunday said the NHC.

The NHC added that the Leeward and Virgin Islands may experience heavy rainfall which could lead to flash and urban flooding. The same is expected for Puerto Rico which could also be affected by mudslides.

Haiti, Turks and Caicos Islands, the southeastern Bahamas, Cuba, and Florida could be affected next week.