Leader of Opposition in House, Shyne Barrow returns to U.S. on official visit 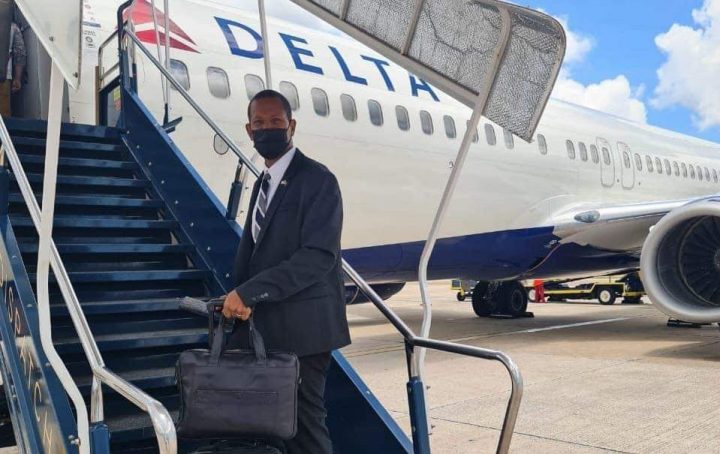 By Aaron Humes: As of Sunday, Leader of the Opposition in the House of Representatives Moses “Shyne” Barrow is in the United States.

He, first according to his social media account then supplanted by an official statement, is on an official visit for purposes of meeting members of the U.S. Congress, including the House of Representatives, and State Senators to “strengthen relationships and establish new relationships to further the development of Belize.”

For Barrow personally, it is a somewhat triumphant return, more than a decade after he was unceremoniously deported after serving a decade long sentence for reckless assault and other crimes.

He confirmed to us that this is his first return to the U.S. after visiting several other countries since leaving prison; he had not tried to do so while appointed as Music Ambassador under the administration of Prime Minister Dean Barrow.

Now, we understand, he is traveling on a diplomatic passport to which he is entitled as Leader of the Official Opposition under the Constitution.

Today he is in Atlanta, Georgia, where he visited the grave of civil rights activist and preacher the Reverend Dr Martin Luther King, Jr.

“Dr King fought and died for freedom. Today I enjoy the freedoms and civil rights I do because of servant leaders like Martin Luther King,” said Barrow, adding that much like Dr King’s famous “dream” that all will be judged by the content of their character, not the color of their skin, those of African descent in both the U.S. and Belize will join together to enjoy the promise of freedom and civil rights including education, wealth and health, security from crime and good governance.

We’ll continue to follow the story as Barrow says he will be giving regular updates from America.