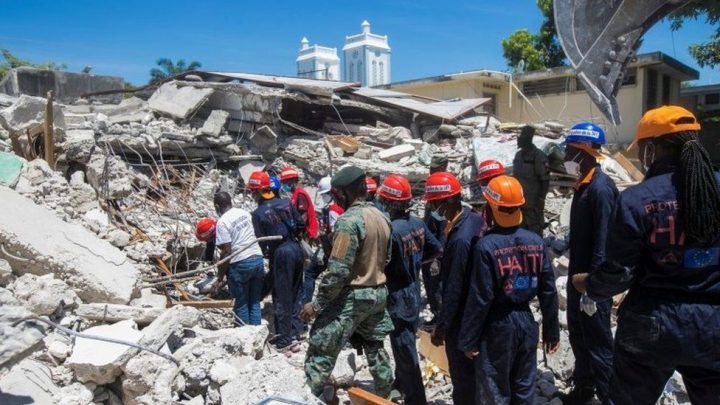 By Aaron Humes: Tropical Depression Grace has impacted the area worst affected by Saturday’s 7.2-magnitude earthquake in Haiti, which has already killed 1,297 people. Rescue workers are rushing to locate survivors as an unknown number are still missing. A further 5,700 are injured. More than 30,000 families have reportedly been left homeless.

It is feared heavy rain brought by Grace could trigger landslides, the BBC reports. Roads already made impassable by the quake could be further damaged by the rains, so aid teams are racing to get essential provisions to the quake-hit region before Grace hits.

Search and rescue teams have been arriving from the United States and Chile, with more on the way from Mexico. Cuban medical teams are already in Haiti and helping people. Humanitarian organizations say survivors need drinking water and shelter. Homes, churches, and schools were among buildings flattened in the quake. Some hospitals were left overwhelmed and in need of supplies as they struggled to treat the injured.

The earthquake compounds problems facing the impoverished nation, which is already reeling from a political crisis following the assassination of its president last month.

The southwest of Haiti appears to have suffered the worst of the damage, especially around the city of Les Cayes.

The epicenter of Saturday’s quake was about 7.5 miles from the town of Saint-Louis du Sud, the US Geological Survey (USGS) said. But the tremor could be felt in the densely populated capital of Port-au-Prince, some 90 miles away, and in neighboring countries.

Prime Minister Ariel Henry declared a month-long state of emergency and urged the population to “show solidarity”. Pope Francis offered prayers for the victims during a Sunday address and expressed hope that aid would arrive soon. And Japanese tennis star Naomi Osaka, whose father is from Haiti, said she would donate her earnings from next week’s Western & Southern Open to help finance relief efforts.

Previously, a 2010 earthquake in Haiti killed more than 200,000 people and caused extensive damage to the country’s infrastructure and economy.