UDP Party Leader Patrick Faber on COVID-19: ‘It is in everyone’s interest to fight together’

Belize: A Country That Is Tolerant and A Neighborly Place

Jamaica is in ‘Brace for Grace’ mode, says Jamaica Gleaner on Tuesday 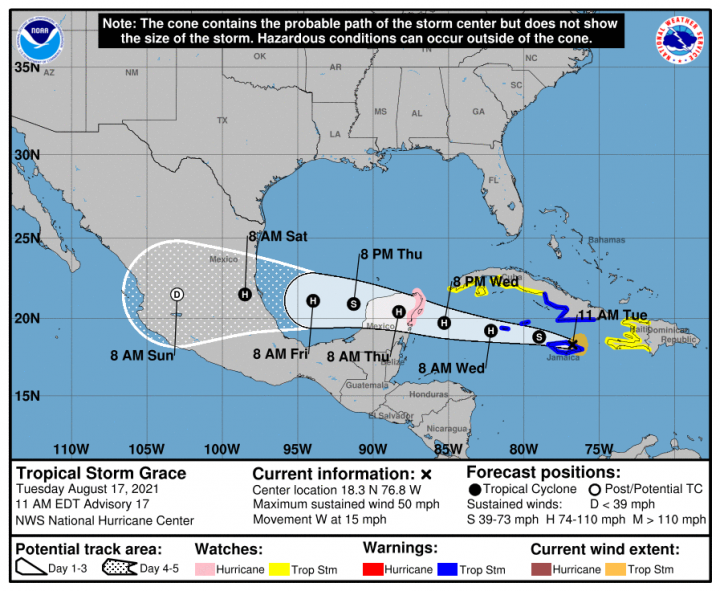 By Rubén Morales Iglesias: The Jamaica Gleaner said the Meteorological Service of Jamaica advised on Monday that eastern parishes would begin to be affected by showers from Monday night and those would intensify and spread across the island by Tuesday.

Prior to that the United States National Hurricane Centre had placed Jamaica under a tropical storm watch saying heavy rainfall and gusty winds were expected on Tuesday.

According to The Gleaner, forecaster at the Meteorological Service of Jamaica, Orlalee Green said the main impact of the weather system would be experienced on Tuesday into Wednesday morning. The showers would begin to dissipate by Wednesday afternoon said Green.

According to the NHC at 9 am on Tuesday, August 17, Tropical Storm Grace had sustained winds of 50 miles per hour, was located at 18.3 North and 76.8 West, and was moving west at 15 miles per hour.

The NHC said in its 9am advisory that “heavy rainfall across the Haiti, Dominican Republic, Cuba, Jamaica, the Cayman Islands and the northern Yucatan Peninsula may lead to flash, urban, and small stream flooding, with potential for mudslides highest in Haiti and Jamaica.”

The NHC said that by Wednesday night and Thursday the Yucatan Peninsula should be affected by winds, rain, and storm surge.

A hurricane warning might be likely for that area by this evening said the NHC.

The National Meteorological Service of Belize said at 6 am on its Forecast Discussion on Tuesday that “as the Tropical Storm Grace continues on its west track, it will cause moisture and instability to increase over the [forescast] area, by late Wednesday to Thursday. In meantime, conditions will continue to be warm with isolated showers or isolated thunderstorms.”

Meanwhile, the NHC said Tropical Storm Fred had been recently downgraded to Tropical Depression Fred and was now located inland near the Alabama/Georgia border.

At 9 am on Tuesday, Tropical Storm Henri was located over 100 miles south-southeast of Bermuda. Henri had sustained winds of 50 miles per hour, was located at 30.4 North and 64.3 West, and was moving west-southwest at 6 miles per hour.