‘The elephant not in the room’: UDP makes showing at united front without Leader of the Opposition 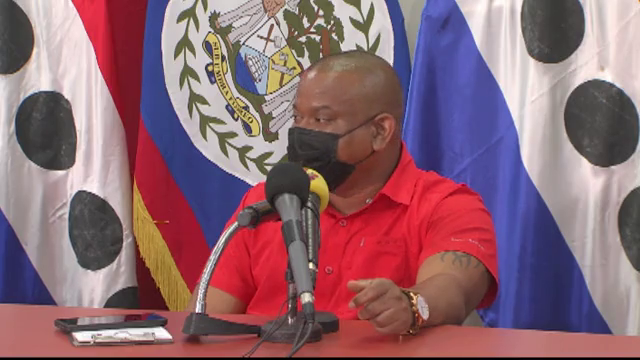 By Aaron Humes: As willing as the United Democratic Party brass were to discuss national issues in their capacity as the Official Opposition at today’s briefing, they were largely unwilling to discuss their own internal issues.

But there continue to be reminders every so often that the UDP is not as united as its name declares. Party communications these days are bifurcated, sent on both the party’s original letterhead and a new one from its “Parliamentary Caucus”. As with former Senator Juliet Thimbriel, the behind-the-scenes moves to jostle for power ahead of next year’s National Convention occasionally spill out into the public eye. And leader Patrick Faber’s detractors waste few opportunities to make trouble.

So today as Faber said at the start of the meeting, the party wanted to take a break from its troubles and come do its job – to speak on national issues and how they would impact their supporters and the wider population – for what turned out to be a little more than two hours.

But as we asked the leader, is today’s showing an attempt to wrestle back media attention from the freshman Leader of the Opposition, whose triumphant return to the United States has dominated press headlines for the past few days, and whether it would have been more prudent and tactical to wait until Barrow’s return to host a unified press showing.

Faber, after chuckling, told us it couldn’t wait. “The truth is that from what I’ve gathered the Leader of the Opposition is away for two weeks and these matters are very pressing. But this is a mass party; the Leader of the Opposition is one man. And so, we have the breadth in this party, we have a wide cross-section of persons that can speak on these issues, something we may have forgotten because we have spent so much time fighting internally. Our demonstration today, hopefully, is one that shows that we have this country at heart and we don’t allow the Government to go on unchallenged with this nonsense…”

He added that many Belizeans have told him on a daily basis that the PUP is headed out when they call the next election: a one-term government with whom they are not pleased and that the alternative is a UDP return.

As for Barrow’s role, Faber not too subtly emphasized that he is a member of the party, though with higher rank than most, and he can be slotted in where he can fit. While the party’s struggles do continue internally as he conceded, “when we are in public we are one, big happy family; one big happy Party.”

For his part, Barrow has told us he did not feel the need to consult on his trip with a man who admittedly does not have the majority of support within the party if the recall convention results are any indication. Their struggle is set to go on until a final resolution at a Party National Convention in the near future.