Man assaults his girlfriend for offering food to another man, claims he does not recall the event 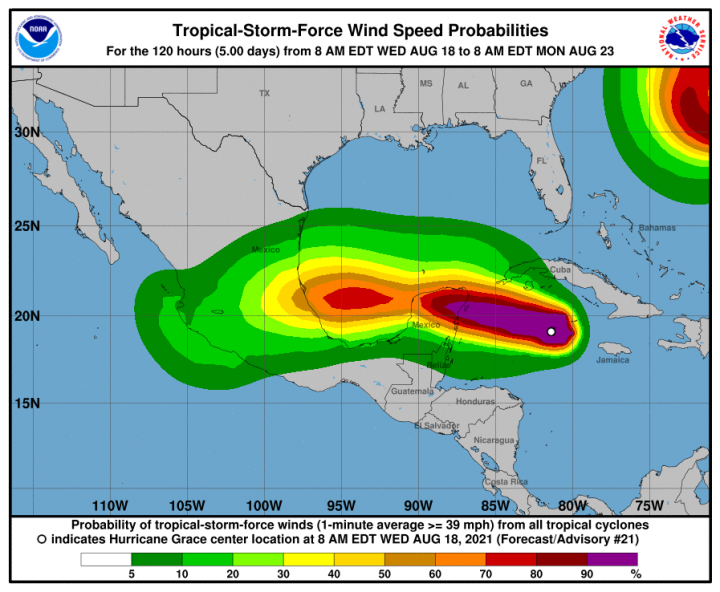 By Rubén Morales Iglesias: Hurricane Grace which is expected to make landfall tonight or early Thursday over the Yucatan Peninsula, north of Belize, should bring rain, thunderstorms, and could cause flooding over low-lying areas said the National Meteorological Service of Belize (NMSB) commonly known as the Belize Weather Bureau.

The United States National Hurricane Center (NHC) and the NMSB said that at 9 am Hurricane Grace had maximum sustained winds of 75 miles per hour, was located near latitude 19.4 North, longitude 82.2 West, or about 65 miles west of Grand Cayman. Grace was moving to the west-northwest at 15 miles per hour.

The National Meteorological Service of Belize (NMSB) said Wednesday at 6 am that the extended forecast called for a slight increase in moisture over mainly southern areas as Hurricane Grace makes its way just north of the country. The NMSB said that as Grace moves north of the area and over the Yucatan Peninsula, a further increase in moisture and instability is expected late Thursday into Friday”.

The NMSB said that radar imagery showed that there were a few showers over the sea and to the northeast of Belize caused by the approach of Hurricane Grace but that no showery activity was observed over the mainland.

The NMSB also said that moist and unstable conditions are expected to increase over the area during the next few days.

“Apart from today where showers or thunderstorms will be isolated except for a few more over the north, a gradual increase in showery and thunderstorm activity is expected over the next few days as grace moves over the Yucatan Peninsula. This will support several outbreaks of showers on Thursday through to Sunday and may lead to flooding over low-lying areas,” said the NMSB.

The NHC said in its 9 am advisory that “hurricane conditions and a dangerous storm surge are expected over portions of the Hurricane Warning area in the eastern Yucatan Peninsula of Mexico beginning late tonight or early Thursday. Preparations to protect life and property should be rushed to completion.”