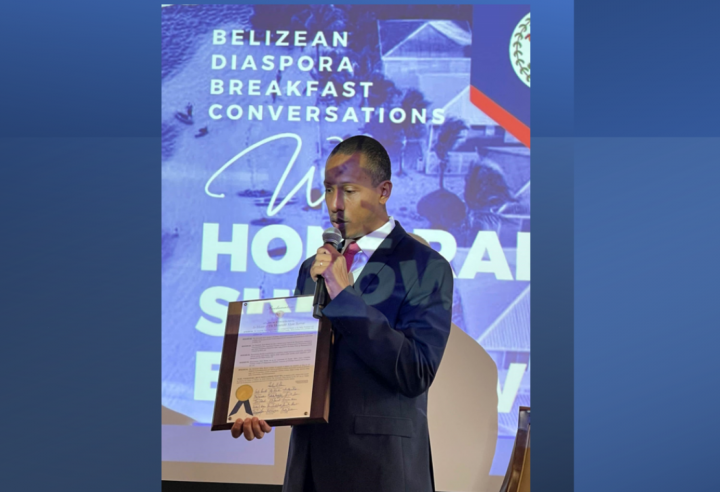 By Rubén Morales Iglesias: The Belize Leader of the Opposition (LOO) Shyne Barrow was recognized with a plaque by the Atlanta City Council on Friday during a meeting with the Belizean Diaspora in Atlanta Georgia.

“We discussed foreign investment to Belize, tourism, education, empowerment, citizen security and the great relationship we share with the U.S. Embassy Belize for the last 40 years,” said Barrow who explained that he had a great meeting with the Belizeans in Georgia.

At the same time, the Atlanta City Council presented Barrow with a plaque for his work in Belize.

“We the members of the Atlanta City Council, on behalf of the citizens of Atlanta, do hereby recognize The Honorable Shyne Barrow on this 20th day of August 2021 for his dedication, commitment and service to the great people of Belize, Central America,” reads the plaque signed by Atlanta City Council President Felicia A. Moore, 12 city councillors, and three other officers.

The plaque recognizes Barrow as “a distinguished Member of Belize Parliament and Leader of the Opposition” and “a world-renowned Grammy Award winning writer, performer, and publisher”.

The Atlanta City Council plaque also recognizes him for being “a devoted leader to the Mesopotamia Community”, for “transforming his constituency through educational scholarships, job training and job creating small business support, family support, gender equality, youth engagement, sports development, and citizen security”, and for continuing “to advocate to improve the standards of living for all Belizeans by pushing for policy that calls for investment in human development, increase in minimum wage, access to education, creation of industries, economic recovery, citizen security, diaspora voting rights, accountability, and ethical governance”.

The plaque additionally recognizes him for sitting in three different national committees, including the Constitution and National Affairs Committee.

“Thanks to the President of the Atlanta City Council and all the Council Members for the distinct honor. Thanks Verlene Pitts and Erica Antoinette [Castillo Slaton] for organizing everything. The Belizean Diaspora is key to the development of Belize,” Barrow said.

The Belizean Diaspora Breakfast Conversation with Barrow was held at the Commerce Club in Atlanta from on Friday, August 20.

Prior to this morning’s recognition, Barrow met members of the Georgia Senate including Senator Dr. Lester Jackson who awarded him a Distinction of Honor Medal.