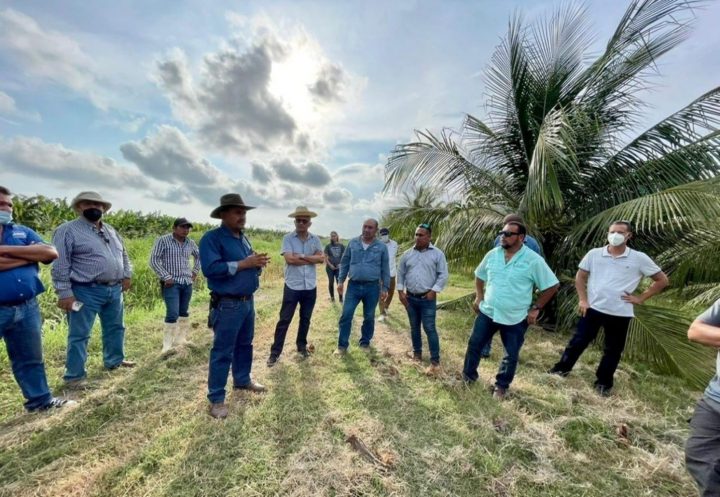 By Rubén Morales Iglesias: If we walk around town, that is in any of the cities and towns, we see a lot of coconuts. Going by that, one would think that we have excess production. However, we don’t have enough says the Minister of Agriculture, Food Security, and Enterprise, Jose Abelardo Mai.

Mai said in a post on Facebook that coconut production is one of the priorities of the Ministry of Agriculture, Food Security, and Enterprise (MAFSE). Belize has five coconut processing plants but there are not enough coconuts to make these enterprises “sustainable and worthy,” he said

To that end, Jaime Briceño, Belize’s Trade and Investment Ambassador, led a Belize delegation to Colima and Michoacán, Mexico from last Saturday to Tuesday to find out more about coconut production, among other enterprises and marketing possibilities for Belizean investors.

“The limiting factor here is production,” said Minister Mai. “Seed is scarce all around the world.”

MAFSE’s visit to Coco Colima allowed Mai and his people to see the industry from various perspectives he said.

Mai said he picked a lot of ideas from their guide, a man named Abraham who worked for 35 years with the National Institute of Forestry, Agriculture, and Livestock Research (INIFAP) and is now with the private sector.

He said that in building the coconut industry, Belize has to consider where it wants to go with the industry. Are we producing coconut for bottling its water, are we boxing and exporting fresh-peeled coconuts, are we going to produce coconut oil, vinegar, coconut flakes, milk, or coconut powder, or is it going to be UHT processed and Tetra Packed?

Whatever is decided, we must plant disease-resistant varieties he said.

The one good thing is that Belize has several options Mai said.

One is to “strengthen Central Farm’s Hybridization program to produce greater number of plants to supply small farmers”.

A second is to “import if available, seeds from Brazil – Green Dwarf, and grow them for seed purposes under controlled areas.” The problem here is that Brazil is no longer selling seeds to other countries like it used to.

Another option is to acquire Invitro Micro Propagation technology from INIFAP in Mexico. In July, when he met with Mexico’s Secretary of Agriculture and Rural Development Dr. Víctor Manuel Villalobos Arámbula at a bi-lateral meeting in Chetumal, the Mexican delegation offered to share with Belize its advances developed by INIFAP.

A fifth option, as outlined by Minister Mai, would be to “make an inventory of our existent local varieties and evaluate them for disease resistance and productivity among other things.”

“We may well have something out there that may be useful for our purposes,” he said.

“One thing is certain!” Minister Mai concluded. “We must increase coconut production to feed the coconut processing plants in Belize.”