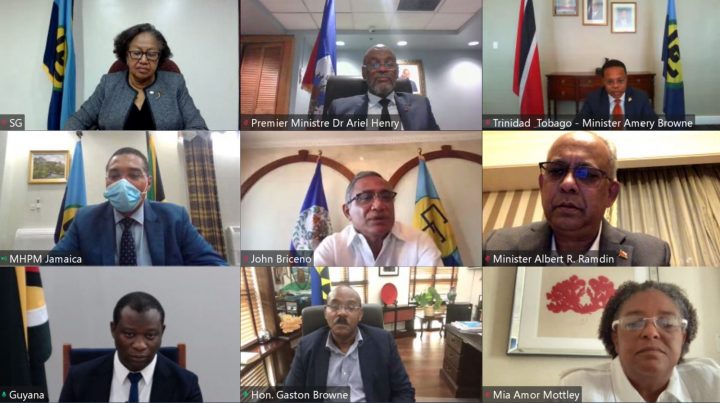 By Aaron Humes: This past Friday, the Bureau of Heads of Government of the Caribbean Community (CARICOM) met in Special Session to discuss the political and humanitarian situation in Haiti.

The Bureau was of the view that the Community must be at the forefront of ensuring that Haiti as a member has a fresh start as it recovers from the extensive devastation of the earthquake of August 14 and from the passage of Tropical Storm Grace, a situation compounded by the assassination of President Jovenel Moïse.

Newly installed Prime Minister Ariel Henry told his colleagues that his government’s priorities are relief and reconstruction following the earthquake, the need for credible and transparent elections, as well as delivering justice through the complex investigation into the assassination of President Moïse. He added that the country’s specific needs would be clearer after the Post Disaster Needs Assessment (PDNA) was completed in five weeks.

The Bureau noted that the crisis presented a good opportunity to rebuild Haiti and offered the assistance of the Community in those areas in which member states had expertise such as the elections process, judicial and investigative support for the inquiry into the death of President Moïse and the restoration of the democratic institutions. Support was also offered with respect to curbing the crime and violence in Haiti.

A number of member states pledged financial donations (Belize has given $200,000 as a country) to address the immediate needs of the country and there was agreement on the need for a sustained development effort over the long term to give Haiti a fresh start. The need for a robust and well-coordinated humanitarian response and vaccination effort was also highlighted.

The Bureau assured the Haitian Prime Minister of the Community’s unstinting support for Haiti as it sought to emerge from its present challenges.

Belize was represented by Prime Minister John Briceño as a member of the Bureau and by new Secretary-General Dr. Carla Barnett. Conference chair Prime Minister Gaston Browne (Antigua and Barbuda) and Minister of Foreign and CARICOM Affairs of Trinidad and Tobago, Senator Dr Amery Browne on behalf of Prime Minister Dr. Keith Rowley are the other members of the Bureau. Other countries attending included Barbados, Jamaica, Montserrat, Guyana, and Suriname.