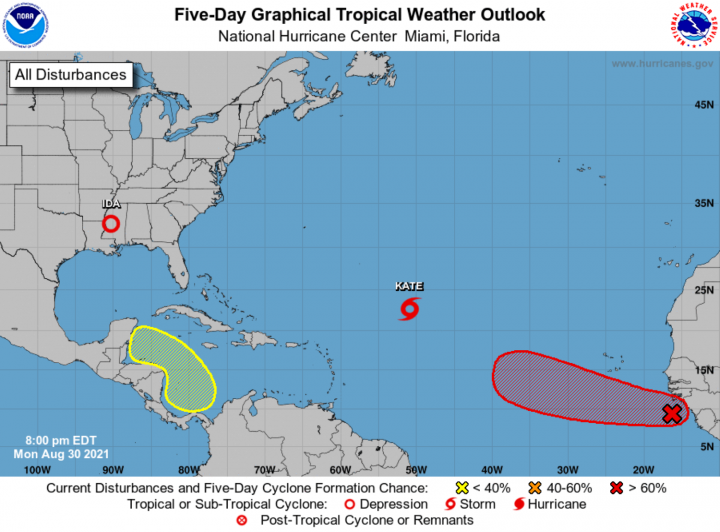 By Rubén Morales Iglesias: Hurricane Ida has become Tropical Depression Ida and is passing through southwestern Mississippi after battering Louisiana, but forecasters at the United States National Hurricane Center (NHC) are still quite busy as there are three other systems, two in the Atlantic and one in the Caribbean.

The one closest to Belize is a broad area of low pressure that is expected to form in the southwestern Caribbean Sea in the next couple of days.

“Environmental conditions appear to be conducive for some slow development by the end of the week, as long as the system remains over water,” said the NHC.

The system is expected to move toward Central America in a gradual west-northwestward or northwestward movement at 5 to 10 miles per hour.

The NHC said it has 20 percent possibilities of forming in the next five days.

The 3 pm NHC advisory on Tropical Storm Kate, which is out in the central tropical Atlantic about 805 miles east-northeast of the Leeward Islands, says it poses no threat to land. Kate has maximum sustained winds of 40 miles per hour and is moving north.

“Assuming Kate is still around by day 5, the cyclone is forecast to become absorbed by a larger extratropical low near Atlantic Canada,” the NHC said.

The third system is a disturbance near the west coast of Africa. The NHC said that conditions are conducive for it to develop into a tropical depression during the next couple of days while it moves west-northwestward at 10 to 15 mph. It has 70 percent possibilities of developing within two days and 90% within the next five days.