Historic ship to be turned into diving attraction in Turneffe Atoll 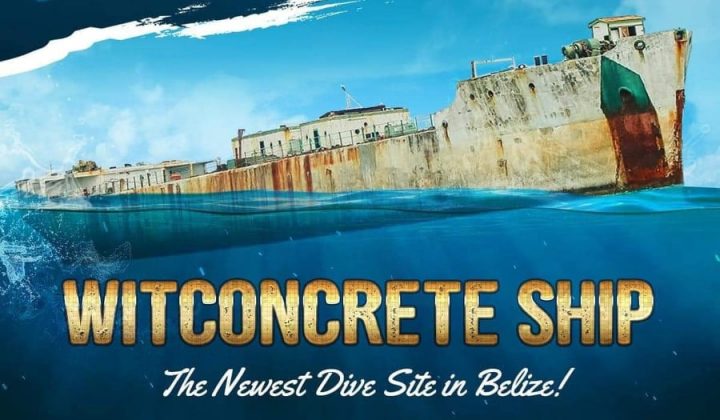 By Aaron Humes: The Wit, a 375-foot long concrete ship is headed to the depths of the sea off Turneffe Atoll after decades of service.

It will now, the Belize Tourism Board reported today, be used as an artificial diving attraction to join the likes of the Blue Hole and Half Moon Caye.

The ship is being donated by Belize Sugar Industries Limited, which previously used it to store molasses offshore after a stint transporting materials in the Gulf of Mexico during the Second World War.

Already the envy of the region for its natural attractions, the Turneffe is cashing in by offering a critical balance between conservation and sustainable development.

Explained Valdemar Andrade, executive director of the Turneffe Atoll Sustainability Association (TASA), “We were looking at a large sandy area because we wanted no possibility of any damage to the eco-system, near any major reef eco-system. That allows us for a margin of error in sinking to ensure that the coral reefs are not impacted. We are looking for a gentle slope because as you know, many of those formations sloped a little bit. But we wanted it to be able to to allow both for possibly free diving and diving. We put it within a conservation zone to be able to ensure that it would have the ability to aggregate fish but also that there was not going to be any user conflicts between tourism and the fishers too as well. This site that we eventually looked at is called the Oasis – and the reason why it is called the Oasis is that it is a huge thousand feet of mostly sand area.”

The project is supported by Government, represented by Tourism Minister Anthony Mahler and Minister of the Blue Economy Andre Perez.

Said Mahler: “The balance we have to create during this pandemic period as we call it is, from a marketing standpoint, livelihoods and lives.”

And Perez added, “If managed effectively, marine-protected areas systems have the potential to directly employ thousands of Belizeans, bringing in millions of dollars in Foreign Exchange.”

The project had to pass an environmental impact assessment, and the ship had to be cleaned of oil, paint, and all material that would have been hazardous to the environment or to humans and other life forms once it is sunk. The vessel is expected to generate significant tourism dollars for Belize because the vast majority of people who come to Belize come for some marine activity. And the monies derived from the tours conducted will be reinvested in managing the site.

The actual sinking of the ship will be done in the next few weeks after the Department of the Environment gave the green light for this project.