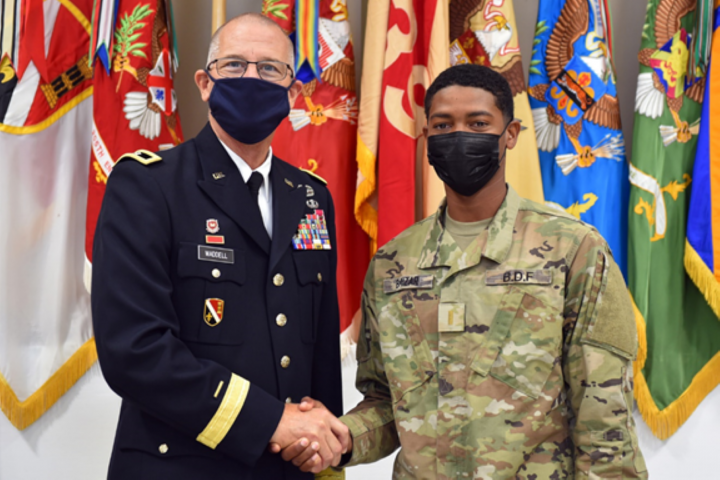 By Rubén Morales Iglesias: Officer Cadet Renon Baizer recently successfully completed the Accelerated Officer Candidate School training at Fort McClellan, Alabama, USA where he graduated on August 8, 2021 earning a Diploma to be Commissioned as an Officer of the Belize Defence Force.

“During his Officer Course, he has successfully met all Physical, Academic, Leadership, and Tactical requirements,” said a statement by the Belize Defence Force on social media.

The BDF referred to Baizer as the “Future of the Belize Defence Force Volunteer Battalion.”

Officer Cadet Renon Baizer is a member of the Belize Defense Force Volunteer Battalion. He is 21 years old and is from Punta Gorda, Toledo. The BDF said Baizer is “humble and kind-hearted” and “from early childhood he had a great passion to be a member of the military, especially since several of his family members were successful within the BDF.”

“Officer Cadet Baizer is a very optimistic individual who believes in hard work and being a team player are essential attributes to be an Officer in the Belize Defence Force.”

The BDF said that Baizer is very much involved in playing sports and believes that being an athlete can convert him into a better leader.

“He trusts that decisiveness and working together will enable success,” the BDF said of Baizer. “He considers himself to be a transformational leader who embraces the principle of command responsibility. Officer Cadet Baizer is a potential Officer of integrity and loyalty.”

The BDF said that Officer Cadet Baizer has, in his short career, made great friendship amongst members of the Belize Coast Guard, Belize Police Department, the Louisiana Army National Guard, and his own organization, the Belize Defence Force.