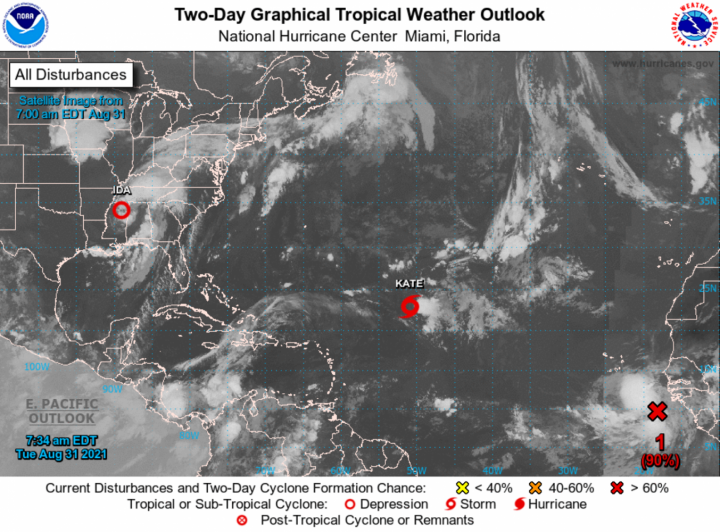 By Rubén Morales Iglesias: The United States National Hurricane Center (NHC) is tracking three systems in the Atlantic and Caribbean, the closest to Belize is in the southern Caribbean and has possibilities of forming into a tropical wave within five days.

The one closest to Belize is a broad area of low pressure that is expected to develop in the southwestern Caribbean Sea in the next couple of days.

“Some slow development of this system is possible by the end of the week, if the system remains over water,” said the NHC in its 6am forecast.

The system is expected to move toward Central America in a gradual west-northwestward or northwestward movement at 5 to 10 miles per hour.

The 3am NHC advisory on Tropical Storm Kate, which is out in the central tropical Atlantic about 815 miles east-northeast of the Leeward Islands, says it is poorly organized and moving slowly out in the open ocean. Kate has maximum sustained winds of 40 miles per hour and is moving north at 5 miles per hour. The NHC said this movement should continue through the day.

The third system is a disturbance that near the west coast of Africa. The NHC said the well-defined low pressure system is approximately 200 miles west-southwest of Guinea. The NHC said a tropical depression could develop during the next couple of days while it moves west to west-northwestward at 10 to 15 mph. It has 90 percent possibilities of developing within two days and 90% within the next five days.