Weather system in the southwestern Caribbean expected to bring rain 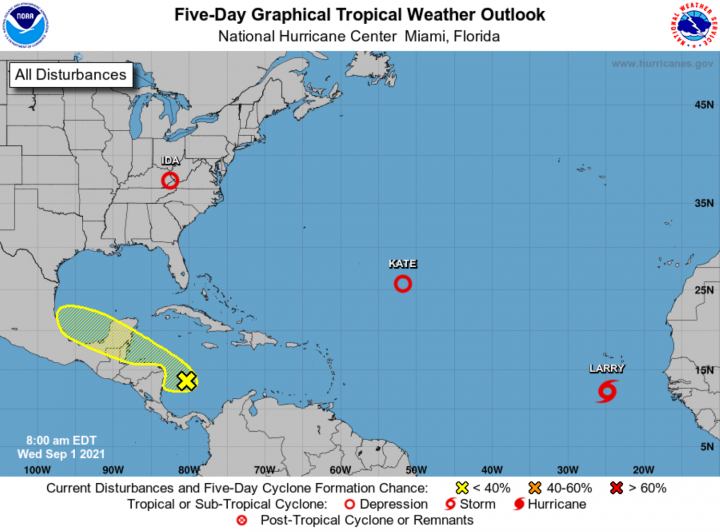 By Rubén Morales Iglesias: The United States National Hurricane Center (NHC) said that if a system of low pressure approaching Central America develops or not, it can produce heavy rains across portions of Central America and the Yucatan Peninsula later this week going into the weekend.

The NHC is still tracking three systems in the Atlantic and Caribbean. The closest to Belize is the system of low pressure that is causing disorganized showers over the southwestern Caribbean Sea.

“Some slow development of this system remains possible over the next couple of days if it remains over open,” said the NHC in its 6 am forecast. The system could be advancing west-northwestward or northwestward at 5 to 10 miles per hour near the coast of Central America.

The NHC said this area of low pressure should have another break for gradual development once it crosses over Belize and Mexico into the southwestern Gulf of Mexico.

The 3 am NHC advisory on Tropical Depression Kate, which is out in the central tropical Atlantic said it is expected to dissipate by Friday. This morning Kate had maximum sustained winds of 35 miles per hour and was moving north-northwest at approximately 9 miles per hour.

The third system is now Tropical Storm Larry and is located about 175 miles south of the Cabo Verdes Islands in the far eastern tropical Atlantic. Larry has maximum sustained winds of 45 miles per hour and is moving westward at approximately 20 miles per hour. The NHC said that over the next couple of days Larry could be moving west-northwestward. Larry is expected to strengthen and become a hurricane by late Thursday or Friday.