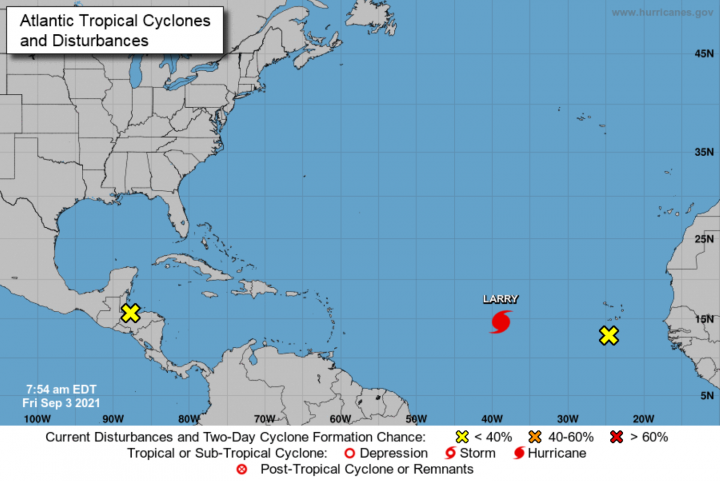 By Rubén Morales Iglesias: The United States National Hurricane Center (NHC) said a surface trough is producing heavy rains over Central America and the Yucatan Peninsula during the weekend.

The NHC said in its 6am report that the disturbance situated over the Gulf of Honduras and part of Central America is causing heavy rains and thunderstorms as it moves west-northwest over Central America and the Yucatan Peninsula over the weekend.

The NHC said that by the late weekend the system should be over the southwestern part of the Gulf of Mexico. However, its development could be limited by unfavorable upper-level winds.

The National Meteorological Service of Belize (NMSB) said the disturbance is supporting moist and unstable weather over Belize.

“Cloudy to overcast skies with some showers and a few thunderstorms, especially over central and northern areas this morning and south this afternoon. Then activity will increase mainly along the coast later tonight,” said the NMSB.

Meanwhile, at 9 am, Hurricane Larry was packing winds of 90 miles per hour and is still expected to become a major hurricane this weekend.

It was located over the eastern tropical Atlantic approximately 1000 miles west of the Cabo Verde Islands and moving west-northwest near 16 mph during the next few days.

The NHC said Larry will produce swells that could cause life-threatening surf and rip current conditions that may reach the Lesser Antilles on Sunday.

At 6 am, the NHC said the third system, a disturbance is causing showers and thunderstorms about 150 miles southwest of the southernmost Cabo Verde Islands. The conditions are not appropriate for its development.