Hurricane Larry could be even stronger than Ida, forecasters say 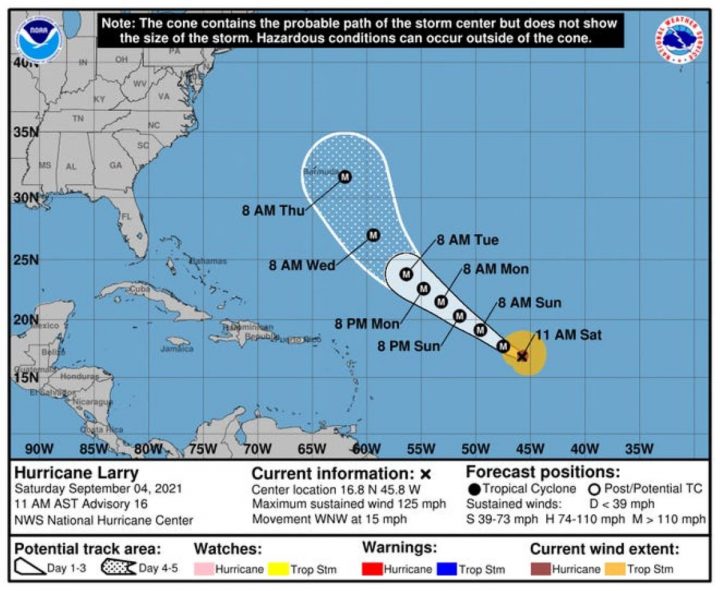 By Benjamin Flowers: Forecasters in the United States are keeping a close eye on Hurricane Larry in the Atlantic Ocean, with fears that it may become even stronger than Hurricane Ida that battered the state of Louisana last week.

According to Accuweather, Hurricane Larry is currently a major Category 3 hurricane but has the potential to become a Category 4 storm later today, with sustained winds of 130 to 156 mph.

“If Larry’s sustained winds increase above 150 mph, it would become the strongest storm in the Atlantic this year – even stronger than Ida,” Accuweather said.

Larry was located about 880 miles east of the Northern Leeward Islands earlier today, moving to the northwest at 13 mph with maximum sustained winds of 125 mph and even higher gusts. The United States National Hurricane Center (NHC) said that little change in strength is expected over the next few days, despite the possibility of fluctuations in intensity.

The NHC stressed that Larry is a large hurricane and is expected to remain a major hurricane into the middle of the week, with hurricane-force winds extending outward up to 45 miles from the center and tropical-storm-force winds extend outward up to 175 miles. The storm has the possibility of lasting into the second week of September and becoming the longest-lived named system so far this season.

Larry is forecast to miss the Northeast coast of the US by several hundred miles but that some areas could still feel life-threatening surf and rip current conditions. Experts are keeping a close eye on the storm for changes.