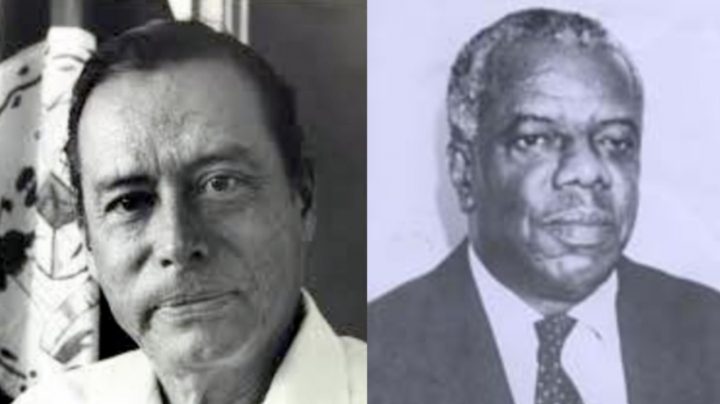 By Dorian A. Barrow, Ph.D., Florida State University: One of the things I admire most about the late Hon. George Price (GP) and the late Hon. Philip Goldson (PG) was that they were political mules, that is, they did their political heavy lifting with pride and dignity. Philip Goldson did much of the early political heavy lifting to lay down the foundation for the role of the political opposition in our democracy. He even did jail-time to achieve that end. George Price’s political heavy lifting was largely about laying the foundation for us becoming an independent state with a democratic system based on social justice, that is, a type of democracy that follows the principle that all individuals and groups are entitled to fair and impartial treatment.

GP’s political heavy lifting took the form of many battles first with British Colonialism, then with the IMF and their form of international financial imperialism, and with secular communism, to forge a vision of social justice that encompasses a political-economic system that endeavoured to prevent human abuses and one based on the notions of equality and equal opportunities in the Belizean society. Today we have 31 politicians who are benefiting from the legacies of George Price and Philip Goldson, the founding fathers of our democracy – 26 PUPs and 5 UDPs. The question, therefore, is how many of them are prepared to continue the political heavy lifting now necessary to advance the country’s social justice agenda, which includes helping more of our people having access to resources, equity, participation, diversity, sustainable development and human rights?

From where I stand I see all five members of the opposition including the Party Leader, the Hon. Patrick Faber, and the Leader of the Opposition, the Hon. Shyne Barrow, seem ready, willing and able to advance the rhetoric of social justice, even while they jockey among themselves to consolidate internal party-political power. On the other hand, I see very few of the twenty six (26) PUP elected members of the House of Representative and in the Briceno Cabinet, with the exceptions of Hyde, Chebat, the Musa-Bernard tag team, Garcia, Fonseca and the Espats (Julius and Mike), seems ready and willing to do the heavy lifting necessary to advance the country’s social justice agenda. My thesis is that there is an urgent need for many more of them to publicly declare, step-up, and fill this breach. But what are the causes of social injustice in this country, and what can our political elites do to help us to achieve our social justice goals? Equally important is why do I think that the Hon. John Briceno, our PM, is in the best position to lead this process?

Let us have no illusions, Sustainable Social Justice is not only an expensive proposition, but also one that must be financed by our own local economy. This is because most financiers are willing to lend you money to build roads, bridges and big fancy buildings, but are much more reluctant to lend you money to invest in your social infrastructure including money to finance your free education programs, to full your Pantry to feed your poor, to build homes to house your homeless, and most importantly to help you to reverse historical discrimination processes as discrimination is the root course of social injustice in any society. As the 1979 Nobel Peace prize winner, Sir Arthur Lewis, a St. Lucian economist established: “Discrimination is the root of social injustice because by its very nature it is unjust. Discrimination is prejudice in action, it occurs when a person or group of people is treated unfairly compared to others”.

Therefore, in order for social justice to succeed all parties must be involved in putting an end to all forms of discrimination, and we have to free-up local monies to finance this imperative. To that end the efforts of the past administration and current Ministers of the Environment (Habet) and the Ministry of the Blue Economy (Perez) to secure Nature Conservancy funding to buy-out the Super-bond is a welcomed initiative. But everyone is responsible for educating and maintaining social equity. This responsibility is based on ethical and moral ideals that formed expectations of a socially responsible person, that our political elites profess to be. One of the things that the fathers of our democracy, Price and Goldson, realized from the earlies is that social justice is both a process and a goal. The goal of social justice education is full and equal participation of all groups in a society that is mutually shaped to meet their needs. Social justice includes a vision of society that is equitable and all members are physically and psychologically safe and secure.

With this in mind, how then can our political elites continue to promote social justice? More of our government officials have to begin actively promoting justice exercising proper human rights of all our citizens irrespective of ethnicity, culture, life style, gender, gang membership, sect, or religion. It is also promoted by providing social amenities and also by keeping citizens educated about the environment including the ‘hoods’ that they were born into and grew up in. Though I do not support locking up gang members whenever there is a spike in murders in regions of the country, I was impressed with the Musa-Bernard recent efforts of trying to ease the tensions between rival Belize City gangs by putting them in an intended rehabilitative program at the Central Prison and personally sitting down with them and listening to their side of the story. I am also encouraged by Chebat’s efforts at inclusive healthcare especially during this time of the pandemic. For example, nobody, regardless of their race, creed or ethnicity who wants a vaccine is turned away from any of the vaccination centres.

There are many other ways that our political elites can practice and promote social justice. This includes educating themselves about social justice issues, support those local organizations that are promoting social justice at the local level, take more positive actions in their own constituencies, harness the power of the social media something that I know Shyne Barrow and Patrick Faber and others are particularly good at, attend demonstrations and protest even if it is against your own party, volunteer, and most importantly donate, i.e., use more of your own personal resources to help those in need. We are tired of those types of political leaders who before elected couldn’t buy $5 tacos on a good day, and when leaving government having over $2M in assets!

Finally, the factor of leadership. In my view more of our politicians have to join Johnny Briceno in embracing this idea of leading for justice, leading for fairness, leading for equity. Though our current PM, The Hon. John Briceno, has a leadership style very unlike any of our former PMs, there is a political authenticity about him that permeates all he does including the way he speaks and in the decisions he makes. As a business man he too is driven by market forces, but unlike business men like Lord Michael Ashcroft who has said don’t come to him for sympathy, you can go to Johnny and expect sympathy with regards to this social justice imperative. And I think more members of his Cabinet needs to take more of their community’s needs to him but less as individuals and much more as a collective. For example, Dolores’ Pantry is empty, while people are suffering, and she simply can’t be the lone voice in the ‘sea’ of Cabinet Voices on the urgent need to find money to fill the Pantry. She and others – education, poverty, homeless portfolios – need your support. We more that ever need your support. The bottom line is that we need more of you to continue the political heavy lifting done in the past by George Price and Philip Goldson.
Feel free to challenge any or all of the issues raised in this piece above and let’s get this discussion on our social justice agenda going.