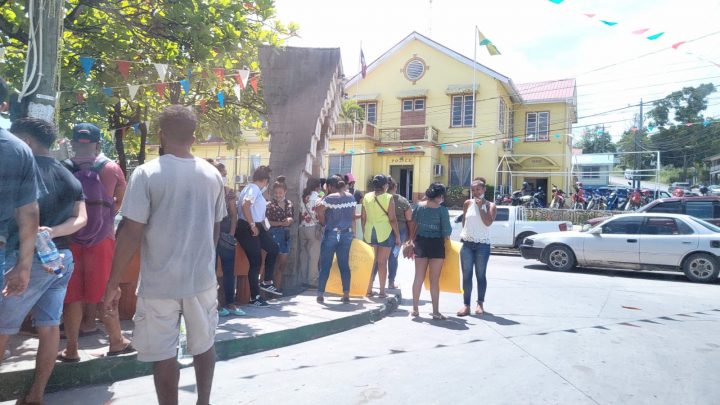 By BBN Staff: A respectable crowd made up mostly of villagers from Santa Familia gathered in front of the San Ignacio police station this morning as charges were expected to be brought against the officers involved in the shooting death of Jesse Escobar.

BDF privates Raheem Samuel Valencio, Ramon Alberto Alcoser and Police Constable Juan Carlos Morales were expected to face charges at the San Ignacio Magistrate’s Court today. Latest information to Breaking Belize News (BBN), however, is that the arraignment will not take place in San Ignacio but rather at the Belmopan Magistrates Court at 1:30 p.m. today, Wednesday.

BDF Private Valencio was caught on video firing a single shot that took the life of Jesse Escobar in front of Branch Mouth Stop and Shop store in Santa Familia village. Commissioner of Police Chester Williams informed the media that he does believe the BDF soldier used excessive force.

Charges were levied also against Police Constable Juan Carlos Morales who was in officer in charge of the joint patrol. On Tuesday, Police Commissioner Chester Williams said that “the fact that the officer lied in the statement … that’s the reason why he is going to be charged.” According to the ComPol, the department needed to make it loud and clear that once officers are found to be lying on an official statement that forms part of an investigation, that they will be dealt with.