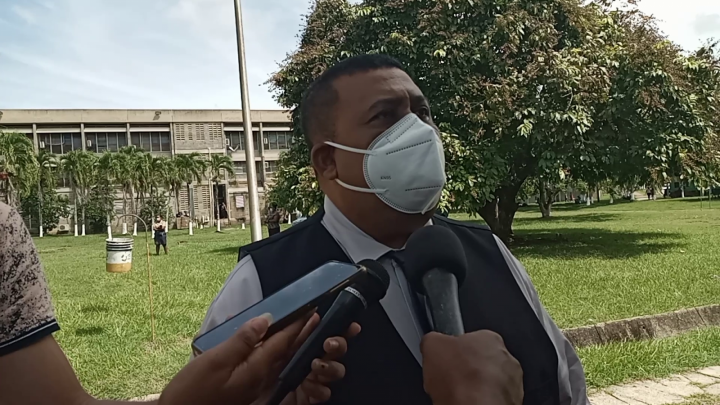 By Aaron Humes: He has taken on the arduous task of defending a man unpopular with Belizean society at the moment, but defense counsel for Private Raheem Valencio, Oscar Selgado, is no shrinking violet.

The question of any ‘remorse’ or other feelings never came up in their discussions, he told reporters on Wednesday outside the Belmopan Magistrate’s Court: “… I have taken instructions from him and I have given him some sort of counsel and guidance since yesterday so he is composed… I did not take note to his state of mind as to say remorse or no remorse, I just spoke to him as an attorney and I did not take note of anything else but I am saying he is composed in the sense that he is up, he is strong, and he understands what is ahead of him.”

It will certainly be months, potentially years, before Valencio sees freedom as the Department gathers the evidence against him. Disclosure in the case must be made two weeks before preliminary inquiry but the prosecution has up to eight months to lay its foundations and present a case suitable to be approved for trial at the Supreme Court.

A key part of that evidence trial will be the surveillance video gathered from the site of the incident and while officially he has no comment, Selgado began laying the seeds of doubt in a charged remark: “As a defense attorney, I will not make any comment as to what I make of the surveillance video because that would be showing my hand and saying what my strategy is. But the video is out in the public but I must say for one to fully appreciate what is on that video, one has to be either a trained attorney, trained ballistic expert, or a trained scenes of crime technician to understand what is in that video, that video is not just a movie, and that video is not in evidence just yet. That video is just a video, until it is tendered in the court, it is evidence, so I won’t even comment on it because it’s not evidence, it’s not before me properly, it’s not before the court.”

Later, Police Commissioner Chester Williams listed the charges against the other accused: “…Mr Morales, and the other BDF soldier will be both charged with attempt to pervert the course of justice in the sense that they provided statements that were inaccurate to the police during the investigation. The police officer will also be charged with aggravated assault upon a young man in the store as well as assault by virtue of the use of the baton that he hit one of the young men with while at the store. We’re also looking at internal charges for the police, act of prejudice to good order and discipline and breach of the department policy because the force he used in that particular incident goes clearly against our use of force policy so he’ll be charged with breach for department policy as well where that is concerned.”

Again, the group returns to court on November 30.