Tropical Storm Nicholas forms in the Gulf of Mexico, several other disturbances in the Atlantic 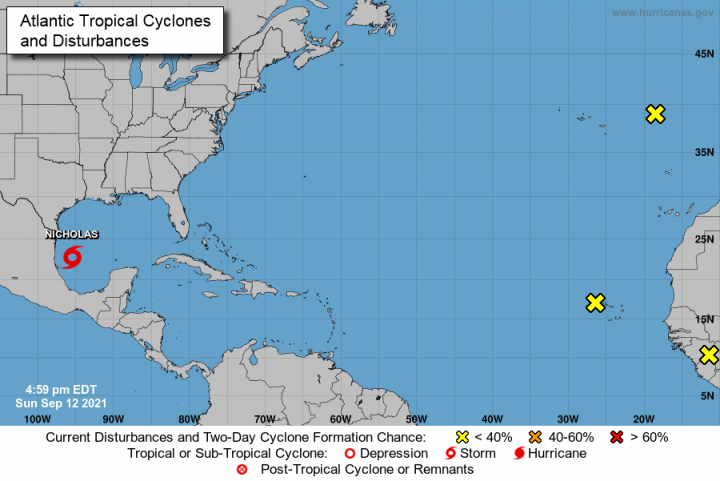 By BBN Staff: Tropical Storm Nicholas formed off the east coast of Mexico this morning, while three other tropical disturbances are moving in the Atlantic according to the United States National Hurricane Center (NHC).

Nicholas, which was located 180 miles northeast of Veracruz, Mexico, and 310 miles south-southeast of the mouth of the Rio Grande earlier today, is expected to strengthen as it moves northwest in the Gulf of Mexico at 15 mph with maximum sustained winds of 40 mph.

Yahoo News notes that tropical storm warnings and watches have been issued for territories going from the east coast of Mexico to the south coast of Texas, as the storm is forecast to pass near or just offshore the coasts of northeastern Mexico and South Texas late Monday, and approach the south or central Texas coast Monday night or early Tuesday.

The NHC is also monitoring three other tropical disturbances in the Atlantic which it says have the chance of either becoming depressions or storms early next week as they move westward over the Atlantic.

There was another wave causing disorganized showers and thunderstorms near the Cabo Verde Islands earlier today which has since\dissipated, and the last disturbance is located a few hundred miles east-northeast of the Azores and is expected to move south-southeast toward warmer waters. Those conditions will be more favorable for development giving the system a 20 percent chance of developing by next week.

If these systems form into tropical storms, they would be named Tropical Storm Odette, Tropical Storm Peter, and Tropical Storm Rose. The 2021 Atlantic Hurricane Season has seen 13 named systems including five hurricanes, three of which have been major hurricanes of Category 3 strength or higher to date.