KHMH Morgue filled to capacity, bodies of deceased COVID patients not being claimed

Food, wine and song: ‘A visit to the Coppola Hideaways’ 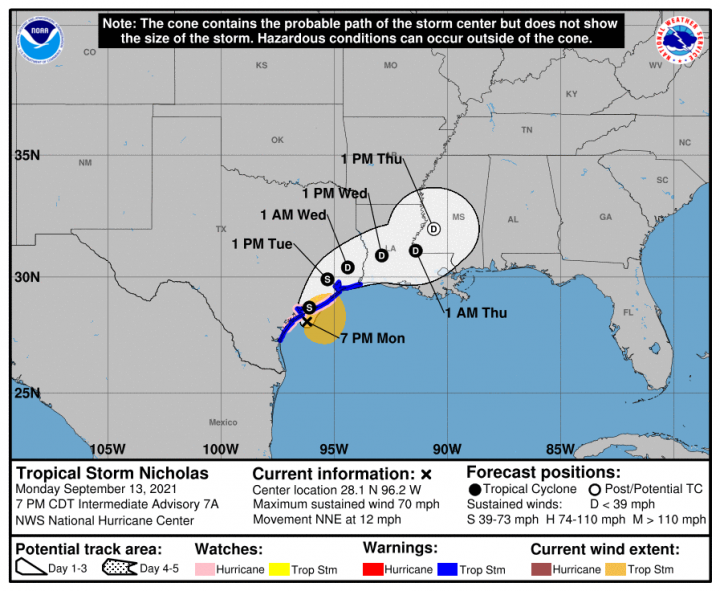 By Benjamin Flowers: The United States National Hurricane Center (NHC) says that Tropical Storm Nicholas is expected to drop between 10-20 inches of rain in some areas on the Texas coast in the next two days.

The NHC’s Houston office said that other parts of Texas could see heavy rains as well, and southwest Louisiana could see 5 to 10 inches. Storm surge could be as high as three to five feet.

Forecasters said that, as of the 8 p.m. update, Nicholas was moving north northeast at 12 mph just off Texas’ southernmost coast. Nicholas has maximum sustained winds of 70 mph, ahead of making landfall near San Antonio Bay, north of Corpus Christi.

That region is under a hurricane watch as warm waters in the Gulf of Mexico could strengthen Nicholas into a hurricane just before making landfall.

According to Yahoo News, the NHC is also tracking two disturbances that could develop into tropical depressions this week.

“The first and most likely candidate is a tropical wave that rolled off Africa’s west coast. It’s charging west at 15 mph and forecasters said a tropical depression is likely to form later this week. They gave it a 40% chance of formation in the next two days and 80% within the next five, as of the 8 p.m. update,” Yahoo News said. “The other disturbance, an area of low pressure expected to form midweek a couple hundred miles north of the central Bahamas, is expected to gradually strengthen.”

Odette and Peter are the next in line on the list of storm names.