Weather experts monitoring activity in the North Atlantic, Caribbean Sea, and the Gulf of Mexico 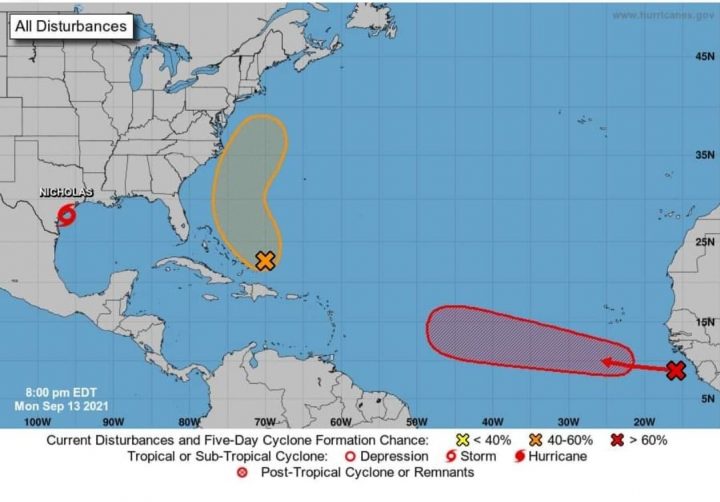 By BBN Staff: The United States National Hurricane Center‘s (NHC)’s latest five-day outlook shows disturbances in the North Atlantic, Caribbean Sea, and the Gulf of Mexico.
.
The NHC has issued advisories for Texas coastal plain near Houston, with respect to the recently-downgraded Tropical Storm Nicholas.

There is currently a tropical wave accompanied by a well-defined low-pressure system, located about 400 miles southeast of the southern Cabo Verde Islands. Associated shower and thunderstorm activity continues to show signs of organization and environmental conditions are conducive for a tropical depression to form during the next couple of days while the system moves generally westward at about 15 mph across the eastern tropical Atlantic Ocean. The system has a 70 percent chance of formation within the next 48 hours and a high 90 percent chance of formation within the next five days.

There is also an area of low pressure expected to form during the next day or two, a couple of hundred miles north of the southeastern or central Bahamas as a tropical wave interacts with an upper-level trough. Some gradual development of this system is forecast thereafter, and a tropical depression could form later this week while the system moves north-northwestward or northward across the western Atlantic. This system has a low 30 percent chance of formation within the next 48 hours and a medium 60 percent chance of formation within the next five days.